The Case of the Wooden Timekeeper 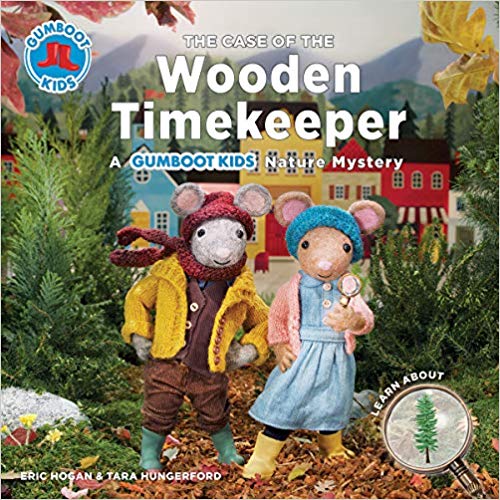 The Case of the Wooden Timekeeper

“You know, earlier today when I was gathering firewood, I found something fascinating,” says Scout.

“I discovered a wooden timekeeper?”

The books in “A Gumboot Kids Nature Mystery” series are based on episodes from the award-winning CBC Kids program The Gumboot Kids (https://gumbootkids.com). According to the show’s website, “filmmakers Eric Hogan and Tara Hungerford [who are also husband and wife] set out to make the kind of TV show they'd want their children to watch. They combined their love of nature with the yearning they felt to slow down and connect with each other and the natural world in a more meaningful, heart-centered way.”

In the books, the Gumboot Kids are a pair of rubber boot-wearing anthropomorphic mice, friends Scout and Daisy. In each of the titles, one of the friends poses a nature-based mystery that needs to be solved, with that mystery being expressed by the book’s title. One of the mice pair presents the other one with three clues which are to be used in solving the mystery. When the duo put the clues together and come up with what they believe to be the correct solution, they confirm their conclusion by consulting, and quoting from, a library book on the appropriate subject. The two then pause for “a mindful moment” in which they reflect on their experience and, to some degree, generalize their learning. The story portion of the books concludes with one of the Gumboot Kids saying a temporary goodbye to the books’ readers. The final four text pages are evenly divided between “Field Notes” and “Nature Craft”, with the former containing a glossary and/or factual information appropriate to the book’s subject matter. The three-step “Nature Craft” also connects to the book’s subject matter.

As the TV show is a combination of stop-motion and live-action, the full-colour illustrations in the books are most likely stills from the stop-motion created portions of the show. As such, they are full of details to be examined, and the posed rodent friends do have an appearance of life to them. The three mystery clues are presented not only via the text, but also visually through closeups of sketches one of the friends has made in a field notebook. A strong hint to the mystery’s solution is presented on the books’ cover via an object under a magnifying glass and the caption “LEARN ABOUT”.

The answer to the question Daisy poses in the excerpt above is the focus of The Case of the Wooden Timekeeper. Scout provides Daisy with the following three clues: a walk in the forest, a tree stump and rings in the wood of the stump. A visit to the library yields a book about trees where the friends read:

Many trees add a new layer of wood under their bark every year. This layer will start out light in color and become darker as the growing season comes to an end. This means you can count each dark ring as one year.

One of the “Field Notes” pages provides an image of a Douglas fir tree, roots included, and labels and describes the tree’s parts while the other page contains additional factual information about trees, including: “Most coniferous trees have needles instead of broad, flat leaves. They are often called evergreens because they stay green year-round.” The “Nature Craft” invites readers to use a pinecone as the body of an animal or insect they will create using other craft materials such as pipe cleaners, paper and glue.

Instead of just passively providing youngsters with science facts, the books in “A Gumboot Kids Nature Mystery” actively engage readers in their learning. Overall, this series is an excellent age-appropriate introduction to a number of science-related topics.