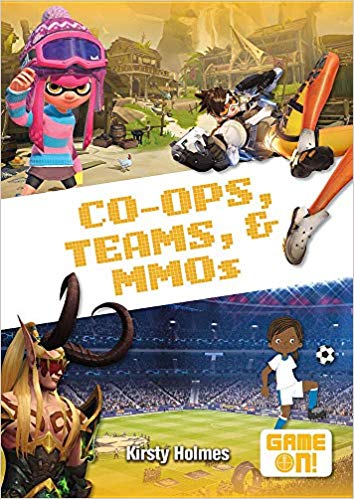 Let’s find out more about games by talking to some professionals. Gaming Professionals are people who do something in gaming to earn a living, such as making video games or writing about them in magazines. These pros really know their stuff, so let’s hear their advice and tips. (p. 26)

Co-Ops, Teams, & MMOss should be split into three different books. Each of the Co-op (Co-operative Games), Team Games, and MMOs (Massively Multiplayer Online) games have enough information within each genre to justify its own book. These three subsets contain some of the largest numbers of players per genre. The best part of this book is the inclusion of the esports section. Esports has gained enough traction in the world of gaming to warrant a book on its own. This book does tie in all three genres to esports as these three genres are some of the most popular in that space. Fortunately, this book does list the some of the most important titles in these genres. The “Pro Talk” section interviews an esports journalist.