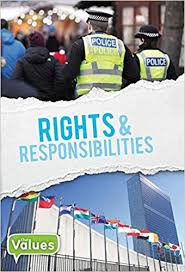 Rights & Responsibilities is part of Crabtree’s “Our Values” series. This series is an eclectic mix of topics which claims to help students “appreciate the diversity of cultures and faiths of the people around them, [so] they will discover what it means to be part of a society”.

Rights & Responsibilities contains some very good information about rights and responsibilities and how rights are interpreted and valued differently in different places and cultures. The Standing Rock Sioux Reservation protest for clean water is used as an example of many citizens accepting their responsibility to stand up for the rights of others. Unfortunately, there are no examples from Canada’s First Nations, Indigenous, or Métis people.

Rights & Responsibilities follows the traditional nonfiction format with a table of contents, glossary, and index. Also included is a page titled “Think About It” which includes three higher level thinking questions for the reader to reflect on individually or discuss with a group.

Review the stories of youth (sic) who fight for rights on pages 28 and 29. Discuss how each of these youth (sic) upholds their responsibilities as global citizens and members of their communities.

The text and photos in Rights & Responsibilities” are presented to look like torn pieces of paper overlapping each other on a page. It is sometimes difficult to follow where you are supposed to look or read next.

Some information is so oversimplified that it is misleading. For example, in a subsection titled “Political Rights”, it states that every person who lives in a democracy has “the right to vote in fair elections, to oppose or criticize the government, to organize or join political groups, and even to be elected to public office”. It overlooks that these are rights of citizens of a country. Simply living in a democracy does not give you those rights.

The book concludes with a section on “Youth Who Fight for Rights”. This section highlights Malala Yousafzai from Pakistan, Payal Jangid from India, Joshua Wong from Hong Kong, and the students from Marjory Stoneman Douglas High School who organized protests for stricter gun control laws. These are all positive role models for young readers.

The information in Rights & Responsibilities is important, but the book, itself, falls short in several significant ways. I recommend this book for inclusion in a library collection only as a supplement to other better resources. It has some redeeming features, but it could be so much better.