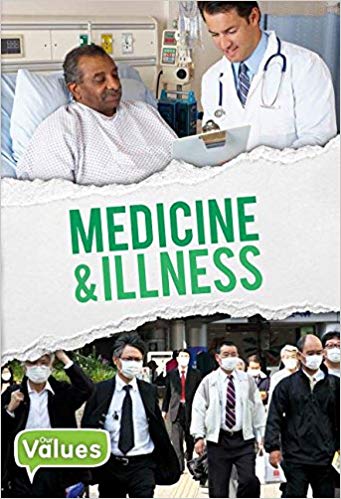 A widely-used robotic surgery system includes robotic arms with surgical tools and a camera that gives a close-up view of the work. They are controlled by a surgeon who watches his work through the camera.

Medicine & Illness is part of the Crabtree’s “Our Values” series. This series is an eclectic mix of topics which claims to help students “appreciate the diversity of cultures and faiths of the people around them, [so] they will discover what it means to be part of a society”.

The photos in Medicine & Illness show a diversity of gender, age, ability, and ethnicity. However, some photos lack the text to support the meaning. On a page titled “Mental Illness” there is no explanation for a picture of soapy hands being washed under a tap. Obsessive compulsive disorder is described on the same page, but young students are unlikely to make the connection between handwashing and OCD. The text describing OCD is beside a picture of a young boy with his head down leaning on his arm.

Many of the topics included in Medicine & Illness are important, such as genetic diseases, chronic illness, innovations such as prosthetic devices, and universal health care access.

Universal health coverage exists in countries such as Canada, Germany, Japan, Russia, and Sweden. It is often paid for by the government, which funds the care with money they collect as taxes.

The work of Médecins Sans Frontières, or Doctors Without Borders in providing universal access is highlighted.

Unfortunately, in other places the writing is not clear. For example, in the chapter on “Treating Illnesses”, the reader is informed in the main text that “A person who exercises regularly and eats a healthy diet has a significantly lower risk of developing coronary heart disease.” On the same page, a speech bubble states: “Heart disease is an example of an illness that can be prevented by a healthy diet and exercise”. This is an oversimplification of a very complex issue and may lead young students to blame the victims of heart disease for their illness.

In the excerpt at the beginning of this review, the use of “his work”, referring to the surgeon, is also poorly chosen.

Medicine & Illness follows the traditional nonfiction format with a table of contents, glossary, and index. At the back is a page titled “Think About It” which includes three higher order thinking questions for the reader to reflect on individually or discuss in groups.

Discuss your thoughts about whether heath (sic) care is a human right. Do you think that every country should have universal healthcare for its citizens? Why or why not?

Overall, Medicine & Illness is disappointing. The information is important, but the quality of the writing is inconsistent. Although I would like to recommend this book, the flaws outweigh the virtues.