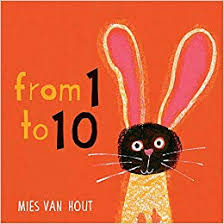 Counting books, along with alphabet books, are often among the first books that parents and other caregivers share with very young children. In From 1 to 10, each spread treats a single number with the simple text being limited to the page’s focal number and a noun that indicates what is to be counted on that page, such as “6 legs” or “8 arms”. With the former, young readers are supposed to count the legs on a hairy insect while the latter requires counting the arms on an octopus. According to information on the copyright page, van Hout’s illustrations were “created with acrylic ink, oil pastels and gouache on colored paper”. All of van Hout’s art portrays something from the animal/insect world, such as a bear, fish, alligator or butterfly. With two exceptions, what is to be counted can also be found on a human body. Because the creatures are not named/labelled, some children may need an adults’ assistance in identifying those with which they are unfamiliar and, in doing so, thereby expand their vocabulary.

The endpapers are not just decorative but also functional, with the opening endpapers presenting the numbers from 1-9 in a colourful 3x3 grid accompanied by a large number 10 appearing on a page by itself. The closing endpapers are a mirror repeat but with the numbers now appearing in reverse or descending order, thereby inviting youngsters to learn to count down from 10 to 1, an opportunity not usually found in most counting books.

The closing two pages of From 1 to 10 begins with the text:

Learning to count gives young children confidence. The following activities will help them achieve a real understanding of numbers – the foundation of mathematics.

The text’s author then provides five suggestions for extending the book’s contents, with one being:

3. Use a mirror to count other parts on your child’s own body: fingers, toes, eyes, mouth, teeth, and so on.

With its padded cover, rounded corners and extra-heavy paper, From 1 to 10 is an excellent introduction to the base ten numbering system. An obvious gift or home purchase, From 1 to 10 belongs in libraries serving this audience level.