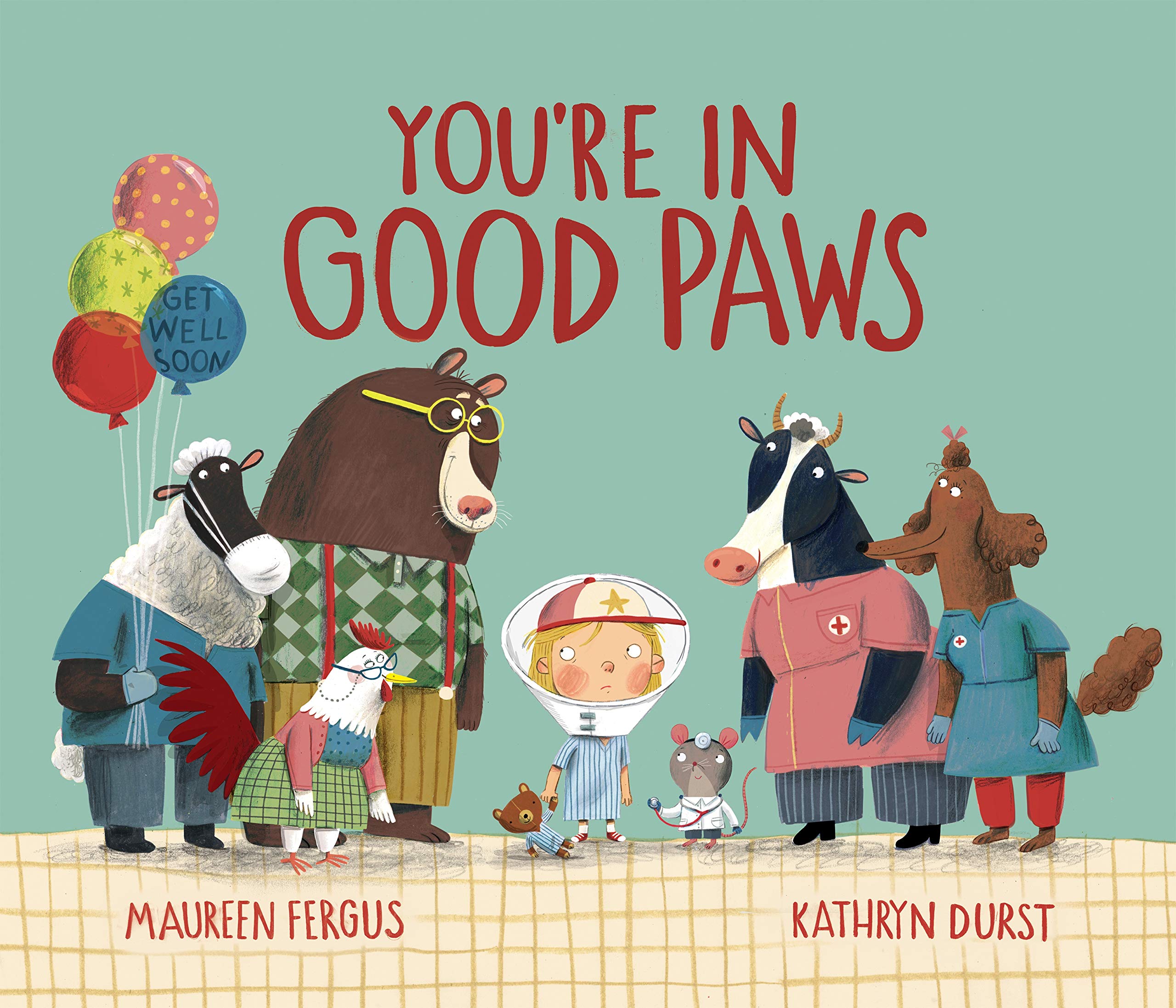 Lee was a little nervous about getting his tonsils out.

“Don’t worry, sweetheart,” said his mom.
The hospital staff will take good care of you.”

“Are you sure we went in the right door?” asked Leo.

“Of course I’m sure!” laughed his dad.

Then he presented Leo to the chicken at the admissions desk.

Maureen Fergus’ plot premise is quite simple: what could/might happen if a hospital for humans and an animal hospital were located right next door to each other, and, by accident, you went into the wrong one? In the real world, you would almost immediately realize you were in the incorrect building and leave. But, in Fergus’ imaginary universe, you would stay as this animal hospital is not just for animals (and, really, humans are, after all, “animals”); it is run by animals.

Beginning with the opening illustration, Kathryn Durst’s art plays a major role in extending the story’s logic and especially its humour. Her opening illustration of the Children’s Hospital and the Animal Hospital shows the two buildings, with mirror image facades, to be situated immediately adjacent to each other. Consequently, young readers can understand how anxious parents, worried about taking Leo, their preschool son, to hospital for a tonsillectomy just might go into the wrong building.

Though Leo’s parents seem unconcerned about his being in a health care facility staffed by animals, Leo does express some anxiety over the fact that his surgeon is a mouse and lacks opposable thumbs. Nonetheless, the tonsillectomy is a success, and Leo even gets to stay in hospital overnight and to eat foods, like Popsicles, Jell-O, ice cream and milkshakes, that soothe his sore throat. And, at the end of the day, Leo is discharged.

After the initial reading, children will want to return to the book’s pages to enjoy all of the details in Durst’s cartoon-like illustrations. For example, the two-page “pre-operative waiting area” is filled with delightful features. Among Leo’s fellow patients are a “wet-head” dog with a toilet seat around its neck, a bird with its head stuck in a peanut butter jar, a cat with its head caught in a fish bowl, a worm impaled by a hook and a huge python-like snake whose body wends its way over the two pages, the body being periodically punctuated by the outline of indigestible items the snake has swallowed. Other visual humour on the pages includes a sunglass-wearing, red and white striped cane-carrying bat (a visual pun on “blind as a bat”) and a porcupine reading Quill & Quire (an in-joke for librarians and other people in the book trade). An animal version of Grant Wood’s “American Gothic” painting hangs on the waiting area wall while Mom and Dad find the area’s reading material limited to brochures on “Fleas & Ticks” and “Obedience School”.

Though Leo is a human, his animal caregivers treat him as if he were one of their own as can be seen in the scenes in the examination and recovery rooms. In the former:

Leo was so cooperative
that when they were finished,
Nurse Lorraine [a cow] called him a good boy and gave him a vigorous ear skritch. [and visually a dog treat]

While in the latter:

Like every patient in the recovery room,
he was wearing a large plastic cone.

“I’ll remove it [the “Cone of Shame”] if you promise not to eat anything off the floor or chew on your own leg,” said Nurse Lorraine.

For a child about to enter hospital for the first time, the contents of You’re in Good Paws actually provide a good overview of the various stages of care the child will encounter, from admission, through the various pre-op and post-op procedures, to being officially discharged. A comforting visual touch is provided by Durst who includes Leo’s Teddy Bear throughout as a continuing silent character.

You’re in Good Paws concludes with the text:

A few weeks later, it was time for Leo to start school.

He was a little nervous, but his Mom said, “Don’t worry,
sweetheart. Your teacher will take good care of you...”

However, given Leo’s recent hospital experience, perhaps he should be worried as Durst’s final illustration reveals that the elementary school is right next door to none other than an obedience school. Only time will tell if the book’s ending signals a sequel or if it’s just an invitation for children to use their imaginations and to create their own stories of what might happen to Leo should he find himself actually enrolled in obedience school.