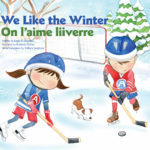 We can go ice fishing.
On vaa la paishe glacé.

While the summer offers many fun activities under the hot, blazing sun, the winter offers many of its own exciting activities under the sparkling, snow-filled sky. We Like the Winter = On l’aime liiverre shows how two adventurous children and their playful dog enjoy the winter months by building snowmen, tobogganing, skating, playing hockey, building snow forts, having snowball fights, Ski-dooing, ice fishing, making snow angels, and enjoying hot chocolate and cookies by a roaring fire.

We Like the Winter = On l’aime liiverre is a dual-language book as it is written in both English and Michif. Readers familiar with the French language will notice the similarities between the Michif and French languages. The phrase, “We like the summer, but we like the winter more, because…/ On l’aime liittii, mii on l’aime liiverre pluss, akooze”, repeats throughout the book, providing an opportunity for children to anticipate when this phrase will be repeated and giving them the opportunity to chime in during read-alouds.

Kimberly McKay’s illustrations are colourful and include a mix of warm and cool colours which evoke a sense of warmth and joyfulness in the cold, frosty winter scenes. The winter activities are highlighted in the foreground of the illustrations while the background depicts the winter landscape (e.g., evergreen trees draped in blankets of snow).

Based in Ingersoll, Ontario, McKay is a freelance illustrator and graphic designer. She creates work for greeting card companies, magazines, and publishers. Her first children’s book with Pemmican Publications was A Journey Through the Circle of Life.

We Like the Winter = On l’aime liiverre is Edgar Danny Desjarlais’ third book with Pemmican, the other two titles being The Tobanz and I Don’t Like Bugs! = J’aime paa lii biibiits!. Desjarlais, an author and musician, was born and raised in Winnipeg, Manitoba. His love for writing began when he hooked a writing pad at a carnival fish pond.

William Sanderson provided the Michif translations for We Like the Winter = On l’aime liiverre, as well as I Don’t Like Bugs! = J’aime paa lii biibiits!. Sanderson learned Ojibwa, Michif, French, and English from his parents. An Indigenous educator who is passionate about advancing Indigenous education, he created the first Aboriginal Education Assistant program.

We Like the Winter = On l’aime liiverre is a wonderful sequel to I Don’t Like Bugs! = J’aime paa lii biibiits!. I wonder if there will be spring and fall versions added to the collection.

Kelsey Sukich is a French-immersion kindergarten teacher in the Seven Oaks School Division in Winnipeg, Manitoba. She loves the changing seasons experienced in Manitoba and is a passionate ice fisherwoman who loves spending the winter weekends on Lake Winnipeg. She is a master angler, having caught a 12-pound, 30.25” walleye in February 2010.