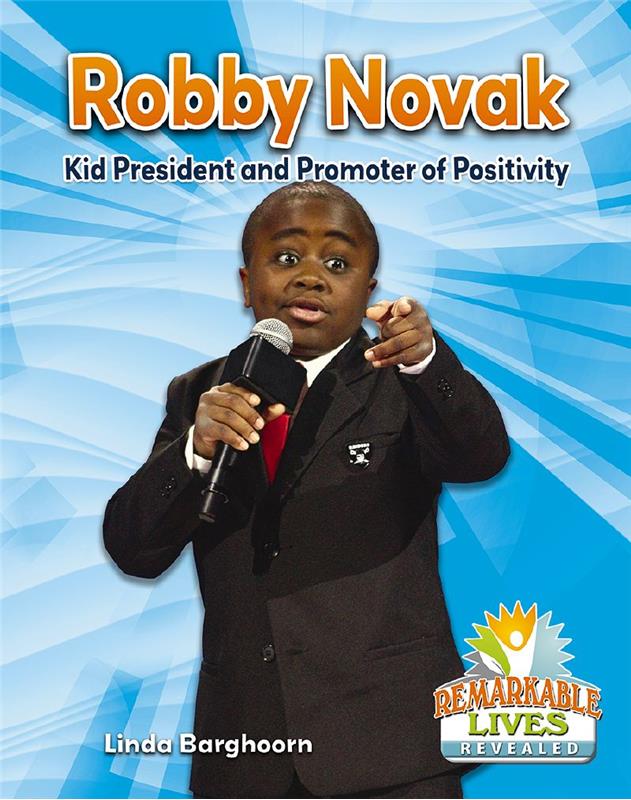 Robby Novak is famous for a character he plays called Kid President. As Kid President, Robby want to change the way adults see children and their role in society. He also wants to shape the way children think about themselves and their power to create change. Robby’s dream is to unite kids and adults to create a happier, better world for all of us.

“The Remarkable Lives Revealed” series tells the stories of both well-known and relatively unknown people who, through their convictions, are making an impact in the world. This topical high interest, low vocab series introduces young readers to such concepts as advocacy, resilience, democracy and other social justice issues. Previous volumes of the series have been devoted to Rick Hansen, Craig Kielburger and Malala Yousafzai, well-known activists whose stories young readers may already know.

Robby Novak, a young affable man, may be known to some readers as Kid President. He has a following on YouTube, and he’s even met with President Obama. But Linda Barghoorn delves deeper into Robbie’s life in Robby Novak: Kid President and Promoter of Positivity. He is known for his message of positivity, and yet, Robby Novak overcame obstacles early in life due to brittle bone disease. Despite the difficulties he’s endured from this disease, Robby remains unstoppable, determined to spread the message that kids have a message worth listening to. His message of optimism encourages adults to listen as well; in fact, more than six million people have watched his video, A Pep Talk from Kid President to You.

The themes in this series are very topical and are an excellent way for young readers to learn about such current topics as civil disobedience, ADHD, and foster care. Through the individuals’ stories, young readers can learn how others have faced challenges and overcome adversity. Their belief that everyone can make a difference in their community is inspiring.

While the books in the series may not appeal to readers for independent reading, they would complement a school unit or assignment in social studies. Each chapter promotes additional learning by asking readers to think critically about what they have just read and to apply the knowledge to their own lives. Highlighted words are defined in a glossary, thereby encouraging readers to expand their vocabulary. Pages are populated with images and quotations, and there is information for further learning at the back of each book that includes writing prompts, the aforementioned glossary and additional books and websites on the topics covered.

The subject matter is relevant and timely, and the biographies are an excellent way to introduce readers to topical issues, like foster care or emotional issues. However, the topic content may become quickly outdated, and readers might not connect with the books’ subjects.