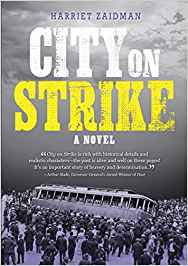 “Yet though our brave boys thought they had secured our freedom, they have come home to discover a new threat, a new enemy.”

[The principal] paused and looked over the whole student body...

“That threat, that enemy, is from the aliens in our midst...They are the foreigners who want to decide how to run our city, our country. They want to determine the conditions of the job, what wages they receive. Some of these people also think the public should support them with Relief if they don’t work - in short they want to overthrow our way of life and take away everything this great country has built.”...

He raised his right hand and pointed his index finger at the children, stabbing it as he spoke.

“I know there are those in your households, your communities, who think this way...Beware the enemy within. Beware their influence. You children are fortunate to be educated in his exceptional school environment by the best teachers society can provide. Show your gratitude. Learn the values of our British heritage, of what hard work and opportunity can bring...Tell your parents, tell your brothers and sisters, that this action will harm our great and growing city... If you hear any treasonous talk about striking or overthrowing the government, I urge you ...to report these people.”

City on Strike honours the working people who took action on their own behalf in the Winnipeg General Strike one hundred years ago. Of the three other young adult novels about this key event in Canadian history, one book focuses on the loss of a childhood friendship (Goodbye, Sarah); another on the impact of the strike on J.S. Woodsworth’s family, especially his daughter, Grace (Grace and the Secret Vault), and a third , (Papergirl), emphasizes the importance of working class, rather than middle class, efforts in the struggle.

City on Strike, like Papergirl, highlights the efforts of everyday people by centring on a working class Jewish family in Winnipeg’s North End. As well as presenting the events and effects of the Strike, Harriet Zaidman shows immigrant families facing discrimination because of their ethnicity and religion. In today’s political atmosphere, her approach makes the novel especially relevant to young readers.

The Sitner family includes Tateh (Harry), an out-of-work machinist; Mama (Goldie) a factory worker, and their three children: Fanny, a telephone operator; 13-year-old Jack, a student and newsboy for the Manitoba Free Press, and Nellie, the youngest, a schoolgirl. Tateh, who recently survived the great flu epidemic of 1918-1919, feels useless because he can’t support his family. The children are aware that the family is barely making ends meet and regard with apprehension the murmurings about a big strike looming.

The men in the neighbourhood talk about low wages, high prices, war millionaires and the oppression of “Bohunks, Kikes, Huns and Polaks”. At school, Jake learns the poem “Invictus”, with the lines, “I am the master of my fate/I am the captain of my soul”, but observes that it doesn’t seem true for working people. He sees how the rich live when sent to deliver the Free Press on Wellington Crescent, an area with mansions on lush lawns.

As Jack delivers his papers, a boy comes out, introduces himself as William Andrews and helps Jack deliver the papers. He says it looks like fun and that it must be nice to earn one’s own money. His father is A. J. Andrews, a former Winnipeg mayor, soon to establish the anti-labour, strike-breaking Committee of 1,000. William quotes his father as saying that workers want too much money and want to be in charge even though they’re not smart enough. In spite of their difference in perspective, the boys become friends, of sorts, until William’s father orders him back indoors.

After the Strike is called, the only one in the Sitner family earning money is Jack as both Mama and Fanny have walked off their jobs. The workers at the Manitoba Free Press are also on strike, but volunteer replacement workers (scabs) have stepped in to publish the paper. Jack has been selling the strikers’ paper, the Western Labour News, but earns less than from selling the Free Press. Although the Free Press claims that the strike is a plot to overthrow the government, Jack sells the paper out of desperation and lies to his mother about where he got the money to buy food. Consumed with guilt at going against his family’s values, he is harassed by strike supporters while selling the papers.

Six chapters of the novel are devoted to the events of June 21, 1919, “Bloody Saturday”, when Royal North West Mounted Police and mounted “Special” police officers attacked a peaceful pro-strike march. Jack, his sisters and Tateh are separately caught up in the action and emerge relatively unscathed, thanks to help from three unexpected sources.

The novel is presented in the third person, with chapters alternating between Jack’s and Nellie’s points of view. Each chapter is dated, starting with April 26, 1919, and ending with June 28, 1919, but not every day in the time period is included. Most chapters start with the point-of-view character situated in a specific place, such as the school yard, thinking about recent developments. Then, strike news over the previous few days is presented as a flashback. The use of the past tense for both the here-and-now and the flashbacks can disorient the reader, especially since the flashbacks are usually dramatized, not summarized. Though linear novels are considered less artistic than those with a time break in the narrative, young readers may find time shifts confusing.

Jack, the male protagonist, gets out of his house and school and experiences developments firsthand. He has interesting encounters, not only with William Andrews, but with a professional photographer who documents the events of Bloody Saturday. In contrast, Nellie, the girl co-protagonist, is passive, mostly reviewing in her mind what others are doing. The only independent thing she does is to break a confidence by telling other school children that her friend Jeannie’s brother is working as a scab. Fanny, the elder sister who is active in the strike effort, would have made a good co-protagonist to show the part girls played in the General Strike.

On the whole, however, City on Strike is an engaging contribution to the young adult literature about this episode in Canadian history. Zaidman’s bibliography shows her extensive research into primary and secondary sources. Jack is a well-rounded character, and the supporting characters seem real. The presence of historical as well as fictional people is informative and interesting. In the novel, readers meet Lewis Benjamin Foote (1873-1957), who chronicled the development of Winnipeg in his photos for over half a century, and his pictures of Bloody Saturday are in the Archives of Manitoba.

Another historical figure is A. J. Andrews (1865-1950). He had four children, but they were daughters, and so William is a fictional construct. Zaidman created him “to show how children from wealthier families lived... and [to show] that children could figure things out for themselves, that they didn’t necessarily agree with their parents that strikers were ‘aliens” who wanted to overthrow the government. William provides hope because he embraces positive ideas about people even though they are different from him.”

In her interview at the end of the book, Zaidman adds that two of her grandparents participated in the strike but that she knows little about their experiences. Although the Sitner family is not directly patterned on her ancestors, one of her grandmothers has the same name as “Mama”, and “Fanny” and “Nellie’ are also family names. Zaidman explains that, although the General Strike motivated workers to organize, they continued to suffer throughout the 1920s and 1930s. Only the Second World War brought full employment and the gradual breakdown of barriers against Jews and other ethnic groups.

“Racism and fake news are being used today to divide society, just as the Committee of 1,000 used it during the strike,” Zaidman states. She hopes “children will recognize the motives behind racism and false information and reject them.”

Ruth Latta, who lives in Ottawa, Ontario, is the author of Grace and the Secret Vault (Ottawa, Baico, 2018, info@baico.ca).