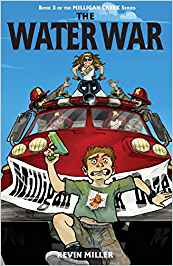 As the overhead garage door eased down, Dean lay flat on his stomach under the lilac bushes a few yards away, watched his mother drag Billy down the street, the sullen boy still protesting.

“Come back with my tail between my legs, hey?” Dean said, looking down at the photo of his victim. “We’ll see about that.” He slithered out from beneath the lilac and crept down the street, heading in the opposite direction of his mother and Billy.

A block away, a shadow detached itself from a building and followed Dean, water pistol in hand.

The Water War, the third book in the ongoing “Up the Creek!” novel series, once again follows brothers Chad and Matt and friends Dean and Andrew as they continue making trouble in their small Saskatchewan town. This time round, a new character is in the mix with the arrival of the fetching and mysterious Fiona Pickleberrybush. First spotted at the community pool, newcomer Fiona attracts the attention of all the boys in town, except Matt. Preferring to spend his summer plotting the next great adventure rather than salivating over the beautiful new girl, Matt takes an immediate dislike to the newcomer. Causing some initial friction amongst the tightknit group of friends, this Fiona vs. Matt antagonism jumpstarts the novel and helps push the plot forward.

Author Kevin Miller continues to depict authentic male friendship and adolescent decision-making with both genuine honesty and a good sense of humour. Middle-school readers are certain to recognize themselves in the characters of The Water War, making the novel relatable in both its themes of friendship as well as the first awakenings of romantic affection. However, the real highlight of this novel is high-stakes game of Assassin. It’s the ultimate game of survival in which every player is both hunter and prey. Inspired by the author’s own childhood games, Assassin pits the books’ characters against one another in a spy vs. spy-like event filled with alliances, strategy, and lots of water guns.

Readers of the series’ previous stories are certain to predict that this water war will quickly spiral out of control with laugh-out-loud sequences of frenzy and surprising reveals at the game’s conclusion. Nonetheless, this action-packed adventure offers fresh ways to integrate some of Milligan Creek’s most notable supporting characters, including consistently baffled Staff Sergeant Romanowski and Henrietta Blunt, the woman in charge of the creeks’ Heritage Marsh and standout from the second novel, Unlimited. (http://www.umanitoba.ca/cm/vol24/no30/unlimited.html) Add on an amusing subplot involving Dean’s mom, Mrs. Mueller, as the lone adult participant of Assassin, and this water war competition offers a sure-fire way of engaging readers for the duration of the 167 paged novel.

With a series that appeals most ardently to hesitant male readers, this third outing is an enjoyable read ripe with the fun of heat waves and summer vacation. Although slightly less entertaining as the well-paced sequel before it due to overflowing dialogue and a final action sequence that seems to be stretched just a bit too far, The Water War remains a great choice for those looking for an engaging middle-school novel with a cavalcade of boisterous boys and humorous hijinks.