People Who Changed the World: Politics and Social Activism 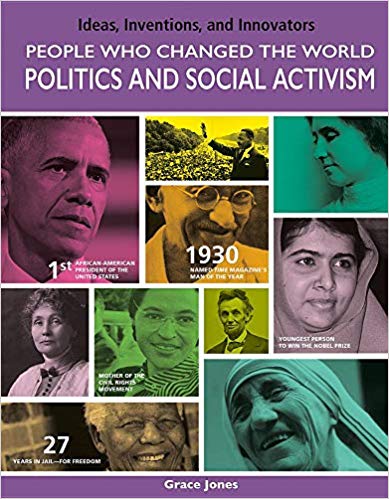 People Who Changed the World: Politics and Social Activism

In 2006, American civil rights activist Tarana Burke began a nonprofit organization called Just Be Inc. Her goal was to help young women of color deal with the trauma of sexual abuse. Burke looked for a motto that symbolized the empathy and empowerment she hoped to share with the girls. She decided to use the phrase “me too”.

On October 5, 2017, news broke of multiple allegations of sexual harassment and assault against the powerful Hollywood producer Harvey Weinstein. On October 15, the actress Alyssa Milano invited people who had experienced sexual harassment or assault to use the phrase “me too” on social media. That same day, the hashtag #MeToo went viral, proving that sexual harassment and assault is a major problem around the world. It was soon discovered that Tarana Burke had actually begun using the phrase more than ten years earlier. Burke is now credited as the founder of the powerful #MeToo movement.

The “Ideas, Inventions, and Innovators” series, comprised of four titles, offers readers basic, limited information about achievements in a variety of areas. Each title begins with a very brief introduction followed by a page on which there are 12 photographs relating to the featured topic with a question printed beneath each one. Though the premise of the series is sound, there are several flaws. Firstly, some of the selections are questionable (one wonders what the criteria were for inclusion in this series), and there are many omissions. For instance, in the title about science and arts, there are no composers or musicians (though singer Nina Simone is included because of her affiliation with the civil rights movement; is she more deserving of inclusion than, say, Beethoven or Mozart?). Some of the information is not clear. For example, the author states that the Great Wall tells people about ancient Chinese culture (how?) and that Louis XIV’s decision to move his court from Paris to Versailles gave him “more control over the government and his nobles”. To understand this assertion fully requires prior knowledge or further study on the part of the reader. Occasionally, the sequence of information is ‘off”. In the chapter about Abraham Lincoln in the title about politics and activism, for instance, on the left hand page there is a photo of soldiers awaiting treatment after a Civil War battle, but the Civil War, itself, is not explained until the right hand page. There are also missing details, one of them being the lack of explanation about the symbolism in the design and colours of the new South African flag which “was to signal a new democracy in South Africa and the end of apartheid”. Lastly, there is an inconsistency in the style of the text: some paragraphs consist of short, cropped sentences, suited to a much younger audience, while others are made up of more complex sentences and vocabulary tailored to the target audience. An attractive layout and colour illustrations (photographs, drawings and info-graphics) add visual appeal and enhance the text, but the thick-lined graphics superimposed on other illustrations or filling up white space are superfluous and clutter the page. A table of contents, a glossary and an index are provided along with a brief list of books and websites for further investigation of the topics.

People Who Changed the World: Politics and Social Activism includes information about U.S. Presidents Lincoln and Obama, suffragette leader Emmeline Parkhurst, civil rights leaders and activists Martin Luther King, Rosa Parks, Mahatma Gandhi and Nelson Mandela, missionary Mother Teresa, environmental activist Al Gore, Tarana Burke, founder of the #MeToo movement, and Malala Yousafzai, the youngest person ever to win the Nobel Peace Prize. In this title, some of the stories are stronger than others in that they provide more information relating to the person’s activism. The weakest in this regard is the story of Helen Keller, with just a single paragraph devoted to her activism.