Houndsley and Catina Through the Seasons 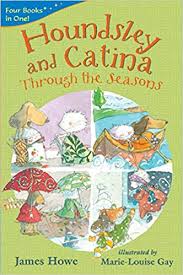 Houndsley and Catina Through the Seasons

“I know something you are good at already,” said Houndsley, “although you will never be famous for it.”

Catina began to purr. “Being your friend is better than being famous,” she said.

Readers will experience the joys and wonders of the seasons as they go on adventures with Houndsley, Catina, and Bert through summer, fall, winter, and spring! Houndsley and Catina Through the Seasons is four books in one as the collection contains four “Houndsley and Catina” titles that were previously published between 2006 and 2009. Each three chapter “book” in this compilation contains a moral lesson, and the text is accompanied by beautiful, colourful, and whimsical illustrations.

The first “book”, “Houndsley and Catina”, shares how focusing on becoming famous and winning prizes can take away the enjoyment of an activity. Catina, who was determined to be a famous writer, spent every evening writing another chapter in her book until she had finished with 74 chapters. She proudly gave Houndsley her book to read. Catina was so certain she would become a famous writer that she mistook Houndsley’s unimpressed speechlessness for awe and amazement. Every Saturday evening, Houndsley made dinner for his friends, Catina and Bert. One evening, Bert suggested that Houndsley enter a cooking contest. Catina excitedly encouraged Houndsley to enter the contest so that he could become famous! But the stress and pressure of competing against others in front of a big crowd and being filmed for television left Houndsley clumsy, forgetful, and off his game. All the embarrassment led Houndsley to exclaim that he would never cook again. One night, while Houndsley and Catina were engaged in one of their favourite pastimes, watching fireflies, they reflected on their journeys of trying to become famous and win prizes. They discovered that it was more important to enjoy what they were doing than to be the best.

In “Houndsley and Catina and the Birthday Surprise”, Houndsley is sad because he does not know when his birthday is, and Catina subsequently discovers that she also does not know when hers is either. For two days, they do not see one another, except in passing, and Houndsley worries that Catina is still sad from not knowing her birthdate. Houndsley devises a plan to bake Catina a special cake and throw her a surprise birthday party. Meanwhile, Catina has been knitting Houndsley a new sweater and planning a surprise birthday party for him! With a little help from Bert, Houndsley and Catina end up surprising each other on the same day with birthday parties. They then decide that, in the future, they would celebrate their birthdays together on the same day.

The third “book”, “Houndsley and Catina and the Quiet Time”, is set during the first big snowstorm of winter. All is quiet… it is Houndsley’s favourite time of the year. For Catina, a snowstorm means not being able to do what she had planned. By Houndsley’s having Catina listen to the quiet, pretend that they are on an island, read and write poems, play board games, daydream, and play in the snow, Houndsley manages to help Catina find joy in the quiet time. Later that day, Houndsley, Catina, and Bert slowly trudge their way through the snow to the gazebo in the park to perform in a concert. The final note “lingered and floated and fell into the quiet time.” The silence and beauty experienced amidst a snowy winter day is felt by the reader.

During the last “book”, “Houndsley and Catina Plink and Plunk”, with Bert’s help, Houndsley and Catina overcome their respective fears of riding a bike and going canoeing. It is a story about experiencing each other’s favourite activity, even if it scares them, because they want to do what their friend wants to do.

Houndsley and Catina Through the Seasons is a collection of four of the more than ninety books that James Howe has written for young readers. In 2007, Howe won The E.B. White Read Aloud Award for Picture Books for Houndsley and Catina. It is an award that honours books that represent the universal read-aloud standards established by E.B. White’s work. Howe currently resides in New York State.

Marie-Louise Gay’s illustrations were created using watercolour, pencil, and collage. Almost every page in Houndsley and Catina Through the Seasons is adorned with Gay’s detailed, expressive, and colourful illustrations. Gay has authored and illustrated other award-winning children’s books such as those in the “Stella and Sam” series. She currently resides in Montreal, Quebec.

Kelsey Sukich is a French-immersion kindergarten teacher at École Rivière-Rouge in Winnipeg, Manitoba. She loves the beauty and wonder of each of the four seasons, especially the peace and tranquility experienced on Lake Winnipeg during ice-fishing season!