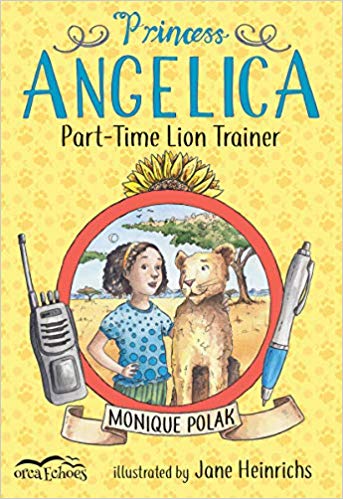 “That's right,” I say. “I didn't have a chance to tell you yet, Joon. But Ms. Jessup offered me the job. It's for the rest of the summer, and then once school starts, on Saturday mornings.”

Leopold drums his fingers on the cafeteria table. “So are you going to show us how you put your head in Mwezi's mouth or not?”

My lion facts are not enough to distract Leopold. Lions use their claws when they have to. I tell stories when I need to. I lean back in my chair. “Did I ever tell you about the time I lived in Africa?” I ask Joon and Leopold.

“You never told me!” Joon says.

Following the events at sleepaway camp recounted in Princess Angelica, Camp Catastrophe (https://www.umanitoba.ca/cm/vol24/no15/princessangelica.html) which included Angelica telling her bunkmates that she was a princess, Princess Angelica: Part-Time Lion Trainer finds Angelica (A.K.A “Jelly”) and her friend Joon spending a day at an animal rescue centre. Jelly shows Joon how much she knows about lions, and when she meets Leopold, who is interviewing children with unusual jobs for his school newspaper, Jelly decides to tell him that she is a part-time lion trainer. Jelly's stories get wilder and wilder as she tries to answer Leopold's many questions, and her exaggerations only make things awkward for her when Mwezi, the lioness, escapes from her enclosure and Jelly’s friends depend on her to solve the problem. Jelly must use all her knowledge of lion behavior, her imagination, some practical skills, and even her storytelling skills to find Mwezi and return her to her enclosure. Joon and Leopold find out that Jelly was not telling the truth about being a lion trainer, but, in honor of Jelly’s efforts, the staff of the animal rescue centre decide that she should get her name put on a plaque on one of the benches she helped repair and be given an opportunity to volunteer at the animal rescue centre under the title of part-time lion trainer.

Polak spins Jelly's story much the same way Jelly spins her own – starting out plausible and ending up wildly improbable, with a jumble of interesting facts and spine-tingling fiction. After the first five pages, the reader may be expecting to read a realistic story about the habits of big cats, wildlife protection and the role of big cat trainers in educating the public. What actually transpires is an anthropomorphic animal-friendship adventure story. While Jelly tells readers that mixing some facts in makes for a more convincing story, it is never stated in the book which things Jelly says are true (for instance, that lions have retractable claws) and which are not (for example, that Mwezi would want to be somewhere bright yellow – cats have different color perception from humans and most things look bluish or yellowish, so she wouldn't have been able to tell), all of which keeps the reader in a pleasantly excited state of guessing until the end.

The resolution comes about a bit too neatly as neither Joon nor Leopold seem to be more than slightly annoyed that Jelly was lying to them, and none of the adults seem to care, but, taken as a story romp and not as a guide to training lionesses,Princess Angelica: Part-Time Lion Trainer is a highly satisfying first chapter book. The black and white illustrations by Jane Heinrichs are expressive and cooperate well with the text; the look is similar to those in Sara Pennypacker’s “Clementine” books.

Saeyong Kim is a public librarian who lives and works in British Columbia.