You Owe Me a Murder 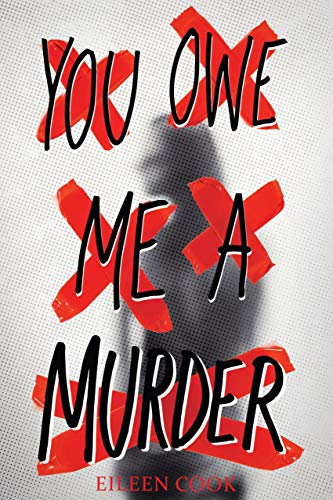 You Owe Me a Murder

I put my glass down, surprised out of my depressing thoughts. “Really, you’ve never been to a play before?”

“But you seemed so excited, I figured you must be some kind of musical theater nut.”

“I’m always excited to try new things.” Alex turned so his knees faced mine. His elbow rested on the counter beside us. He looked perfectly relaxed. His dark hair curled over one eye. He looked like a friendly pirate.

I paused to consider what he’d said. “New things freak me out. I tend to stick with what I know I like.” I took a big drink of beer to avoid how awkward I suddenly felt. “That’s lame, I guess.”

He glanced over. “No, it’s not. It’s just what you feel. Why would liking new stuff be better?”

I shifted on the hard seat, avoiding his gaze. “Because it is.” I struggled to explain what seemed to me a basic truth. People who tried new things were exciting and daring. They were the opposite of me. “Everyone knows that.”

Kim, 17, has convinced her parents to send her on a two-week educational trip to London with fellow students. The school program was promoted as an opportunity for students to be exposed to a different culture while being chaperoned and shown the sights and history of London. Kim’s ulterior motive was to spend more time with her boyfriend Connor. Unfortunately, days before they are to embark, Connor dumps her. Worse, he’s taking his new girlfriend, and Kim has to watch the two of them getting cosy with each other.

Just as Kim is wallowing in self-pity at the airport gate, she meets fellow passenger Nicki who is exciting and daring, everything that Kim is not. To pass the long flight, Nicki suggests they each make a list of things they hate about the person who makes them most miserable. For Kim, it’s Connor; for Nicki, her alcoholic mother. Nicki has a solution for their respective problems: Nicki will kill Connor, and Kim will kill Nicki’s mother. Despite Kim’s not having agreed to this shocking plan, a few days later Connor is graphically killed after falling or being pushed in front of a train. Kim’s worst suspicions are confirmed when Nicki appears shortly thereafter expecting the favour to be returned.

The plot is an homage to Patricia Highsmith’s Strangers on a Train: two strangers meet and agree to swap murders; except this novel’s protagonist, Kim, never actually agreed. Nicki however, is deadly serious.

Kim can be a challenging character to identify with; she freely admits that she is socially awkward and lies to protect herself. However, readers are given insight into her character when it is revealed that she is the daughter of one of the original ‘Mommy Bloggers’. Kim’s entire life has been blogged about for the world to see. In effect, Kim is a victim of her mother’s blogging. As the novel progresses, many readers will find themselves empathizing with Kim and hoping that she manages to outmaneuver Nicki.

Kim’s ex, Connor, is portrayed as a player but is not given enough ‘onscreen’ time to develop further. Love interest Alex is more fleshed out and is more optimistic and outgoing than Kim, beneficial traits that one hopes Kim will discover in herself. Secondary characters fade into the background. The group’s chaperone Tasha is so hands-off one wonders how she landed the job. Readers don’t get much sense either of London’s sights and sounds which is forgivable, perhaps, due to the novel’s pacing.

You Owe Me a Murder is a tautly written, high-concept YA thriller that will keep readers on the edge of their seat.

Chris Laurie is an Outreach Librarian at Winnipeg Public Library in Winnipeg, Manitoba.