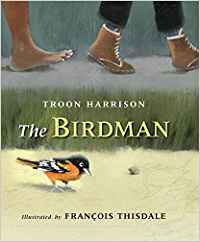 As they crossed the Moira River’s wooden bridge, the slaves stared curiously around. “Look at that bird!” cried the woman with the brand. “That bird done live on my master’s plantation in Alabama!” Alexander tilted his face as the bluebird soared high.

“That bird done fly all the way north,” said the man. “It more free than my wife and children left behind in Mississippi.”

Alexander never forgot the suffering he saw in the eyes of those former slaves. He thought about how a bird could fly free but a person could be bought and sold, beaten, and whipped. He pondered his mother’s words: “Live by the Golden Rule, my son. Treat others in the same way that you want to be treated.”

The life of Alexander Milton Ross (the titular "Birdman") is a notable one in Canadian history. Ross was an Abolitionist from Upper Canada who went undercover in the 1850s to help black women and men escape enslavement in the American South. Utilizing his love and knowledge of nature, he surveyed the land as an ornithologist, all the while gathering information and sharing news of the Underground Railroad.

The Birdman could be used in the classroom as a study on abolitionists or as personal reading for a parent or caregiver to introduce their child to the idea of slavery and how they, too, might think about how they can better the lives of vulnerable populations or people less fortunate or privileged than themselves.

Harrison fits a lot of information into one short pictorial biography. There is quite a lot of text, with multiple paragraphs amounting to sometimes 15 sentences per page, with an accompanying illustration. The book also contains a timeline (pertinent historical information to Ross’ life and work from 1707-1897) and a bibliography at the end. The illustrations are soft, realistic and in colour, and they delicately handle mature subject matter such as slaves with scars from whippings and from being branded by their owners.

Francois Thisdale's illustrations are a blend of drawing and painting with digital imagery. Often, the characters' faces have a photo-realistic quality which can come off as slightly unnerving, but which is also intriguing and highly original and adds an element of realism (which suits the story as it is an historical account). Thisdale uses a collage effect to add subtle layers such as faint details of a map and its coordinates over a scene or botanical illustrations of local flowers and plants. These details add a rich depth to the storytelling and are lovely to pore over.

The story is interesting, but the writing style and message seem sometimes inconsistent, with the language by turns oddly flowery and then starkly factual. While some moments in the subject's life receive lengthy, poetic illumination (his childhood and earliest impressions made by reading the works of such authors as Charles Darwin, John James Audubon and Harriet Beecher Stowe), there were others that felt rushed and disjointed. It may have done the book a service to focus on the period of his life most pertinent to his renown, rather than starting from the very beginning with his birth and relationship with his mother. Harrison utilizes Ross' affinity for birds to illustrate that he believes all beings should be free, and the fact that his mother taught him about bird species was an important influence to be sure. When Ross does look back on his mother’s teachings, however, it is not to remember anything about loving nature or respect for life that the reader had been shown up until this point in his life, but to recall her telling him about the “Golden Rule” (see excerpt above, not mentioned heretofore in the book).

The way in which the story is told (by a white woman about a white man from a white person's perspective but mostly about the plight of black people) can seem somewhat self-congratulatory at times (“The escaped slaves would surely agree that their lives were made better by Alexander’s courage”). It is unfortunate that it wasn't handled with slightly more sensitivity. For instance, when Ross has to flee to Canada with a slave that he illegally helped escape, he is terrified of being discovered, and the reader is told "Now he knew exactly how frightened the slaves were as they fled north". Yes, he was being brave, but it is entirely improbable that any white man of privilege could ever know "exactly" how a black person who had lived their entire lives as a slave would feel. The book is a telling of Alexander Milton Ross’ life story with a focus on his enlightenment as to the plight of others, his resolve to try to do good, and his contributions. It is one part of a whole on the story of slavery in America.

Andrea Zorzi is a librarian working for Toronto Public Library in Ontario.