How to Tame a Human Tornado 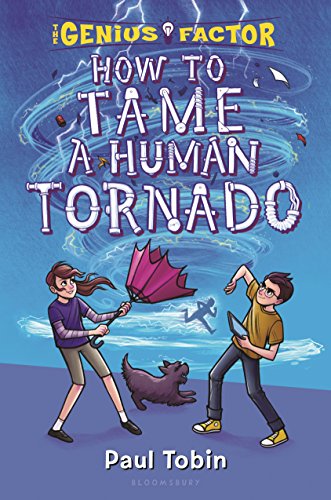 How to Tame a Human Tornado

“Friends,” Maculte said, with the raging sneer returned to his voice. “Nate, tell me…how valuable are your friends? How important are these weaknesses of yours?” Twibble came crawling out of my hair, peered down at the disintegrator pistol pointed at my cheek, and then hid deep in my hair. I could hardly blame him.

Seventh-grade genius Nate Bannister and his best friend Delphine Cooper are back with a new adventure in the series “The Genius Factor”. Nate, compelled to do something a little less than completely intelligent every Friday the Thirteenth, decides to hide several of his inventions all over their hometown of Polt. Unfortunately, their arch-enemies, criminal assassins known as the Red Death Tea Society, find out, and thus begins a race between Nate and his friends and the Society to locate and use his inventions, including Speed Runner pills, Lightning Breath pills, and Make Any Animal a Zebra pills. Each invention results in complete chaos in Polt as do the inventions of Society leader Jakob Maculte whose “slowstorm” slow-release explosions fight Nate’s “Expand-o-Water” flood in their middle school. In the end, the friends stop Makulte’s plot to create an earthquake, but Makulte uses Nate’s truth-telling pill to force him to pledge allegiance to him in exchange for his friends’ lives. The pill runs out just in time for Nate to deceive Makulte by prompting Delphine’s bat Twibble to release a high-pitch sound that destroys Makulte’s disintegrator.

As in the rest of the series, Nate’s inventions and the madcap adventures they cause are far beyond the realm of reality, so completely insane at times that it is difficult to follow the plot. Every invention or device is a mini deus ex machina in itself, a literary “invention” to keep the plot moving and solve a perplexing dilemma. Delphine drowning in the school flood? Nate has underwater breathing pills. The kids need to speed to sites but can’t yet drive? Nate is also extremely rich and has a self-driving car named Betsy. Betsy’s fastest speed, Rocket One, is not fast enough to outrun the Red Death Tea Society? Betsy’s artificial intelligence develops a Rocket Zero on the fly. Although this is about science, not magic, it is infrequent that Nate’s inventions and explanations ever seem to consider the rules and possibilities of science.

Narrated by Delphine, the prose is over the top but doesn’t quite approach hero worship. Nate is seen as a genius, but a human one, with flaws sometimes crazy and sometimes human. In the climactic scene above, Nate’s own love for his friends—and a budding romance with Delphine—are used against him. The truth-telling pill is a continuing motif, a thought experiment of what it might mean to not be able to lie or deceive. Delphine is aware that she is not a typical girl, with her interest in science and technology, and she makes frequent and inspiring references to her budding feminism. But for characters, none can beat Nate’s talking dog Bosper (who can talk because of one of Nate’s inventions). Bosper speaks in a stilted, bizarrely third-person speech that, at times, is the most hilarious aspect here, saying things like “The dog eats peanut butter if someone has some”. In the end, there is just enough human feeling and ironic humor to keep How to Tame a Human Tornado from being accused of pointless nonsense.

Todd Kyle is the CEO of the Newmarket Public Library in Ontario and a board member of the Canadian Federation of Library Associations-Fédération canadienne des associations de bibliothèques.