Shout Out for the Fitzgerald-Trouts 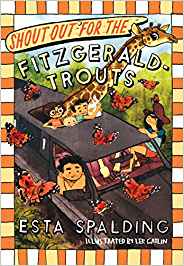 Shout Out for the Fitzgerald-Trouts

After a long day spent making roofs and cooking and swimming, the children quickly fell asleep in a large heap beside the kitchen fireplace. With the moss under them and the sail-roof high above, they felt sheltered and safe. So it was completely unexpected when, several hours later, they heard a strange and sinister noise that shook the branches of the trees. They all sat bolt upright, terrified.

“What was that?” Kimo whispered.

“No idea.” This was Pippa who was holding onto the baby (the only one still asleep).

“Something rustling,” she said. Then she added, “And slurping.” Even as she said the word slurping, she felt a chill up her spine. How could something living on a mountain slurp?

“Slurping,” said Kimo. “What could be slurping?” He looked at Kim, but Kim was looking away. She couldn't face Kimo. She was thinking of the page she’d burned from the textbook, and the secret she was keeping.

Despite their overlapping and irresponsible parentage, the Fitzgerald-Trout children have always been a resourceful, united group with ‘a one for all and all for one’ approach. Loving the freedom and beauty of their tropical island, they still desperately need a home to replace their little green car, a need more acute with the addition of their baby sister.

In the third volume of the series, Kim solves the accommodation problem, discovering a deserted house built into mountain rock, where the only drawback is the fear caused by inexplicable and frightening nighttime noises. Despite their new premises, the children seem to grow apart as they each become preoccupied with their own concerns. Kim focuses on school-work, Kimo on beating the island pole-vaulting record, Pippa busily searches for scrimshaw while Tony, the youngest, tries to protect baby Penny from a scheming stranger. It is only when Penny is kidnaped that they know they must pull together.

Once again, readers happily suspend judgement over the highly improbable scenario of four children and a baby wandering the island with no adult supervision. Instead, they are caught up in the children’s adventures and dilemmas, relishing their freedom and the ability to make their own decisions. As always, the characters are appealing, enterprising and capable, each with their own distinct personalities. Even the baby demonstrates initiative when faced with danger.

The island acts as an intriguing backdrop to a compelling, fast-paced plot involving tense individual and collective situations. There is a new illustrator for this book who equally captures the whimsy and character of the text adding to the satisfaction of the title as a whole. Shout Out for the Fitzgerald-Trouts, an extravagant caper complete with resilient characters and exciting adventure, makes for a diverting read for its intended audience.

Aileen Wortley is a retired librarian from Toronto, Ontario.