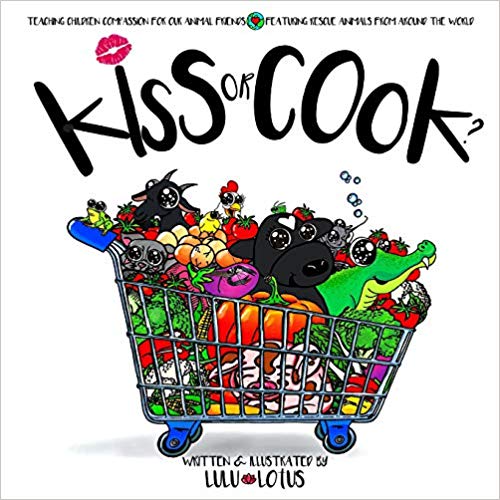 Some people
don’t know
whether to kiss or to cook...
If you are confused
take a
LOOK
at this
BOOK!

Each of 17 pairs of facing pages presents young readers/listeners with the choices indicated by the book title’s question: Is this something I should kiss, or is it something I should eat? The left hand page always contains a cartoon-like illustration of something from the animal/insect world, and the author’s consistent response to the title’s question is that this is something we should kiss. The illustration on the right hand page reveals a frying pan suspended over a gas burner. Something from the plant world is being dropped into the frying pan, and readers are told that it is to be cooked.

Lulu Lotus adds an interactive element to the “animal” page by asking the book’s listeners/viewers a counting question. Since the critters are all to be kissed, Lotus underlines her point by placing one or more emoji-like “kisses:” on their bodies, with a frequently asked question then being, “How many kisses can you count?” However, she does add some variety to her questions. For example, on the “TURKEYS are for Kissing” page, the question reads, “How many tail feathers can you count?”, a task that could be very challenging for some of the book’s younger readers as a number of the feathers are only partly visible behind the bird’s head. Oddly, all 17 critters are given black, globe-like eyes that appear to have stars and planets in them. Most of the illustrated animals will be familiar to children. Each is anthropomorphized somewhat by being given a name. And so the pig introduces itself by saying, “Hi-I’m Mitzi”, the alligator with “Hi-I’m Apollo” and the fish, “Hi-I’m Big Papa”. However, the closing grasshopper remains nameless.

The frying pan/vegetables/grains/seeds pages add a colour learning dimension with the frying pan changing colour on each page. Both the colour of the pan and whatever vegan food item that is being put into it are labeled with the appropriate colour word. Many of the named vegetables, such as tomatoes, corn, beans and carrots, will be familiar to youngsters, but some of the foods, like dandelions (the flowers), fenugreek and hazelnuts, may be new meal items to many.

Back matter includes a page of inspirational quotes supporting a vegan lifestyle, directions to a website about rescue animals (that requires an Instagram account), a vegan doughnut recipe and a colouring page.

Since Kiss or Cook? is a book that is largely preaching to those who have already committed to a vegan lifestyle, as such, it is a home, not an institutional, purchase.