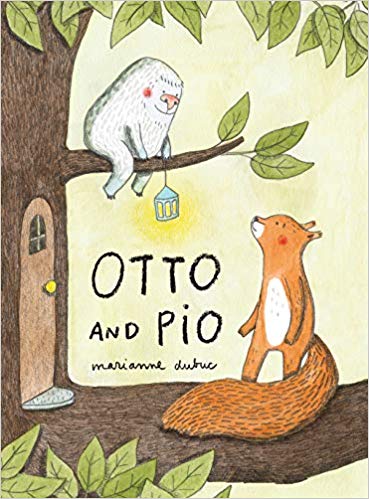 Otto and Pio is the story of a house in a forest and of the growth of an unlikely friendship. Squirrel Otto, who lives high up in a huge tree, finds a spiny green seed pod outside his door. It cracks open to reveal a little animal that looks like a cross between an ape and a marshmallow. It seems to have only two words to its vocabulary: “Pio”, which Otto takes to be its name, and “Mommy”. Of course, Otto has to take him in and share his only bed.

The next morning there was a surprise. The little creature had grown.
He was three times as big as the day before.
“Pio!”

Otto sets out to find Pio’s mother. As days go by, Pio grow larger and larger. Although his increasing bulk is making the shared hammock they use as a bed more than a little cramped, at least Pio takes on some household chores while the squirrel canvasses the neighbourhood with his flyers. There are frequent warnings to Pio to “Watch out for the eagle!” when Otto leaves their treetop home.

When one of Otto’s expeditions seems to be taking longer than usual, Pio make special preparations to welcome him back.

The creature thought that Otto would probably like to return
to a good bowl of soup. And a clean house.
And maybe some yard decorations.

Otto is touched by the greeting but finds that Pio’s increased dimensions are driving him away.

“Whose idea was it to dump a big furry creature at my house?!
I was fine on my own!”

Otto is so caught up in his angry thoughts that he doesn’t notice the eagle swooping down on him as he is stalking away. But a great roar of “PIO!” scares the eagle off, and a grateful Otto decides to make the best of his new living situation.

“Is there some soup left?”
“Pio!” said the creature.
“I have some house renovations to do. Would you like to help?”
They never did find the creature’s mother, which was just as well.

Dubuc has created a pleasant sylvan backdrop, focusing on the mass of greenery from which Otto the Squirrel’s huge tree stands out. The domestic details of the house inside the tree are charmingly drawn in the soft watercolour and pencil illustrations. The text is a little bit overlong for the story it tells, and the last line left me a bit puzzled, but young readers will get some giggles out of Pio’s unchecked growth and his simple, unassuming demeanor.

Marianne Dubuc is the author and illustrator of Lucy & Company; Mr. Postmouse Takes a Trip and many other titles. This book was originally published in 2017 in French as Je ne Suis Pas Ta Maman. Otto and Pio is a worthy addition for larger picture book collections.