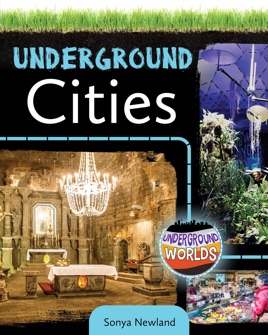 It’s Cold Outside
In winter, temperatures in Montreal drop below freezing. The authorities wanted to find a way to beat the cold – and the traffic – in the city. In 1962, while Montreal’s first skyscraper, the Place Ville Marie, was being built, city planner Vincent Ponte came up with an idea. Why not build an underground shopping mall nearby so people could shop in the warmth? The mall was joined by a tunnel to the main rail station and a nearby hotel. The underground city of RÉSO had begun…

Like other books in the “Underground Worlds” series, Underground Cities presents interesting content using many excellent photos and graphic illustrations supported by sparse but informative text. Each topic includes a “DID YOU KNOW” circle text box with additional attention-grabbing information. For example, in the chapter about Underground Edinburgh, “DID YOU KNOW? Burke and Hare were two notorious Scottish murderers who killed 16 people in 1828. They are said to have hidden the bodies in the South Bridge Vaults before selling them to a doctor for research.”

Montreal, Quebec, is featured in a four-page chapter highlighting the history and the plans for RÉSO, the largest underground city in the world. “More than half a million people use it every day.”

Other underground cities mentioned include Wieliczka Salt Mine, which has a spa with chandeliers carved out of salt, Berlin Bunkers, Helsinki, Dixia Cheng, and Singapore.
One of my favourite features of the layout of the books in the “Underground Worlds” series is the grass growing at the top of many pages. It is a nice reminder that the information in the books in this series is all ‘underground’.

Although the books are only 32 pages long and the text content is limited, the format is sure to catch the interest of many students.