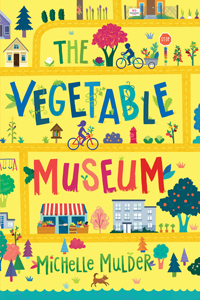 Dad says I’ll drive myself crazy if I keep comparing where we are to where we were, but I can’t help it.

I spin around and see my grandfather smiling at me. With half of his mouth anyway. He had a stroke last year, and part of his face is paralyzed.

I don’t know him all that well – didn’t see him much until we moved in across the street – but he’s an unusual guy. His big passion is growing ”heirloom vegetables,” which as far as I can tell means weird ones that no one else bothers with, like black tomatoes, blue lettuce and purple beans. When he first told me about them, I thought he was losing it…

Chloë, 13, moves to Victoria with her father to help her ailing grandfather Uli. They left behind her busy mother and now live in an apartment building across the street from Uli. Chloë misses Montreal and constantly talks to her friend Sofia on Skype. At first, it looks like their stay in Victoria will be temporary. When the relationship between her parents deteriorates, Chloë’s mother decides to sell their home back in Montreal. Chloë realizes that the move could be permanent.

Chloë’s relationship with her grandfather develops slowly. She wants to understand why her father has not spoken to Uli in years, and so when Uli asks her to help him with his garden, she gladly accepts despite her lack of gardening experience. Uli shares his “vegetable museum”, the garden he grows from seeds collected from friends. Each seed has a complicated history which links it to past lives. The apple tree, for example, comes from a seed carried from Uli’s native Poland during World War II. When tragedy strikes Uli, Chloë is devastated. What will happen to his vegetable museum?

The Vegetable Museum is an engaging middle school novel about family relationships. Chloë’s mother has a demanding career. Chloë is caught in the middle between her desire to return to her friends in Montreal and remain with her newfound grandfather in Victoria. Uli’s complex relationship with his son is revealed rather quickly, something which could confuse some readers.

Readers will definitely learn a great deal about gardening issues, such as heirloom vegetables, cultivation techniques, and preserving produce. The Vegetable Museum also addresses important issues of: divorce, refugees, family relationships, grief, urban development, bullying, friendship, compassion, addiction, sustainability and community. There are powerful lessons about coping with adversity in The Vegetable Museum as Chloë’s father explains, “That garden was where he taught me that even when everything feels too hard to bear, good things can grow.” (p. 102)

Myra Junyk, who lives in Toronto, Ontario, is a literacy advocate and author.