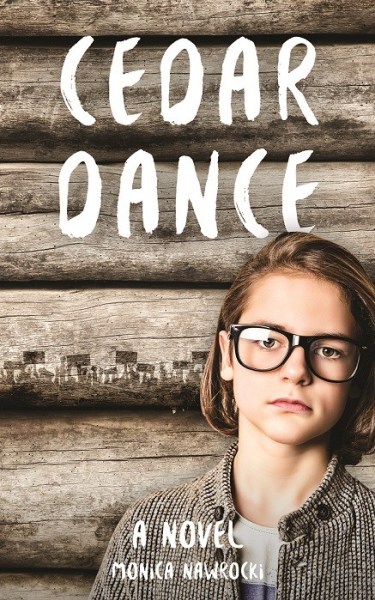 Even when I was well away from the cabins, I kept my flashlight off and allowed my eyes to adjust to the dark. I took the route behind the nurse’s cabin, figuring the protestors would be at the fire pit by now. As I picked my way through the bush, I tried not to think about what would happen if I got caught. I tried not to think of anything but stepping carefully.

When I got close to the clearing, I chose a spot to kneel down. Adjusting this way and that to give myself the best view of the fire circle, I almost didn’t notice the big dark shape creeping toward the clearing from another angle, off to the right and slightly behind me. I shoved my glasses up onto my nose and squinted into the night. It was Black Hoody Guy, and he had no idea that I was there.

As he moved toward the circle, he was also moving closer to me. I crouched lower. I was trying to mentally shrink myself or possibly turn invisible. When he took a step around a tree, he veered slightly way from me, and I exhaled a lungful of air. I stared into the dark to make sense of his weird shape. He was carrying something long and narrow like a baseball bat. No – it had two handles. Like those big hedge clippers.

Cedar, alias ‘Charles’ or ‘Chuck’, has several embarrassments in his life. These include his name, his single parent, hippie tree-hugging mother and his own ‘scrawny’ build and long hair. He is also something of a misfit with his peers. Life for this 12-year-old begins to change when he attends a school camp trip where a nearby logging protest is underway. Glimpsing a protestor who is an older replica of himself and with grounds to believe this man could be his father, Cedar makes surreptitious forays into the forest to watch him. In doing so, he also observes a mysterious hooded figure obviously intent on harm that Cedar helps to thwart. Although Cedar is sent home from the camp for leaving its premises, he has come to learn many truths about himself and his family.

Told in the first person by Cedar, this engrossing and believable story captures perfectly the angst of a pre-teen trying to find his place in the world. Cedar’s story is told with wry, self-deprecating humor while subtly revealing that, despite his doubts about himself and his dubious athletic abilities, Cedar is very much his own person, stronger and wiser than he is aware. The main characters in this book are pleasingly portrayed as real people doing their best according to their lights. Jessica, his long-time loyal friend and sounding board, is outspoken but honest. Cedar’s mother, with her kindness and concern for the universe, and his loving grandparents are all deftly drawn. Even mischief-making Dylan, a peer at the camp, is more than he appears to be.

With camp life as background to the story, it also provides some awareness of environmental issues. The malevolent figure in the woods adds drama and mystery to the plot, but the main tension is over the possible familial relationship between Cedar and the look-alike protestor named Shell. Despite Cedar longing to know more of his father, Shell remains a shadowy figure, and the future of their relationship is realistically put on hold. Cedar Dance is a fast-paced and intriguing read that will be popular with its intended audience.

Aileen Wortley is a retired children’s librarian from Toronto, Ontario.