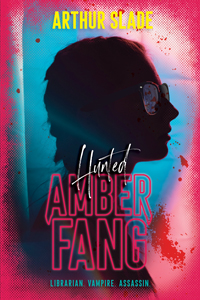 Her hand was perfectly still. Her eyes were blue, just as the picture promised. And she was watching me with a curious diffidence.

“Give me three good reasons why I shouldn’t blow your head off.” Her voice was calm and elegant and contained a hint of an accent.

Three reasons? I swallowed. “One: if you shoot me, you won’t know why I’m here. Two: you’d get your polar-bear rug all stained with brains and blood. It can’t be easy to clean. And three …” I had just impressed myself—I’d rattled those first two off without hesitation. I needed a kicker for the ending. “Oh, Dermot says hello.”

Amber Fang: Hunted is a tongue-in-cheek vampire/secret agent mash-up, first in a series. Amber is a vampire with morals: she only eats people she is certain are murderers with no remorse for their crimes. This complicates her life because she has to do extensive research before every meal to ensure that the people she kills deserve their death. Fortunately, since she is studying library science, she has highly-honed research skills.

Amber is tracked down by a secret organization called the League and is given missions to assassinate people the League believes are evil. But then the evil organizations come after Amber for revenge. All Amber wants is to live quietly and complete her librarian degree, but now she depends on the League to keep her safe, and she can’t be entirely certain what the League’s ultimate goals are. League agent Dermot is a nice guy, though, and he’s pretty cute, so Amber will keep trusting him, for now.

Amber Fang: Hunted is a fast read with lots of chase and fight scenes, and Amber narrates her story with plenty of self-aware irony. Character development is not a priority, but Amber is given some depth with her search for her missing mother, also a vampire, and the one who trained her in her moral code. Remembering her mother’s pithy advice is often used for comic effect, but it also makes it easier for readers to empathize with Amber who is alone in the world. When she meets her father, who believes vampires should eat whomever they want because humans are just prey, she has her world-view challenged. This book ends with Amber running away from the League, unsure what her purpose and place should be.

The setting is full of spy movie tropes—secret underground headquarters, ritzy apartment buildings in Dubai—and Amber makes snide comments about nothing being as glamourous as it’s made out to be. The fights are mildly gory and more humourous than suspenseful. There is a suggestion of romance, but it’s all in Amber’s head.

The writing in Amber Fang: Hunted is straightforward and unembellished. This series will appeal to readers who like making fun of over-used tropes and don’t want a lot of description or character angst to get in the way of the action.

Kim Aippersbach is a writer, editor and mother of three living in Vancouver, British Columbia.