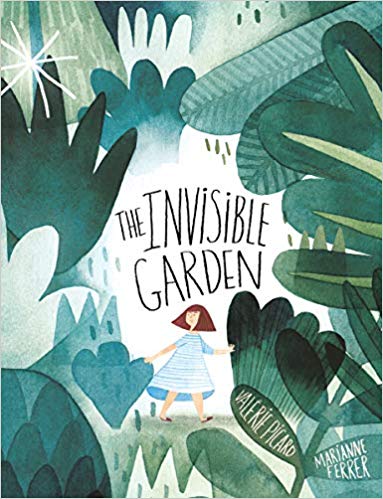 A summer day, a lush garden and a bored little girl are the components of this almost-wordless exploration of imagination.

Because the grownup guests at Grandma’s birthday party are not much interested in Arianne, nor she in them, she takes the advice to go outside and play. In the garden, insects and stones take on epic proportions, becoming flying machines and mountains. They transport the child into the sky and on to an underwater adventure when she follows the arc of a pebble’s throw into a lake. Emerging from the water, she observes a strange reptilian creature that morphs into a dinosaur. The ride she hitches on its back takes her high enough to be able to catch a star in a butterfly net. The starlight then propels her into the realm of unconsciousness from which she wakes back in the garden.

Cool blues and greens are the main tones that accompany the telling of Arianne’s story, and there are a number of interesting juxtapositions of scale (a child small enough to ride a milkweed seed on one page but large enough to ride the sauropod that has appeared on another). Backgrounds are in delicate watercolour wash while the human and animal figures stand out in clear outline. The whole feeling of the book is of a sort of sleepy wonder.

Venezuelan-born illustrator Marianne Ferrer and writer Valérie Picard both live in Montreal. The Invisible Garden was originally published in French in 2017 as Le Jardin Invisible.

If you have room in your large picture book collection for another story of a journey that turns out to be a dream, The Invisible Garden would be an adequate choice.