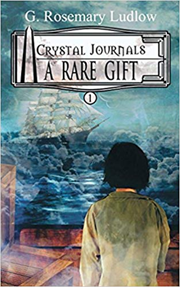 "Nay, there are three orphan boys...I found another one sleeping on the stairs the other day...”

"Yeah, the one with the funny jacket."

Susan gasped. They were talking about her....

"We sneak off, see? Nobody knows they're going ashore. We take them quiet like, and we have our papers as sailors to get ashore."

"What does he want with orphan boys?"

The first one laughed. "What do you care? Just think on spending the money."

Susan was awake in every nerve of her body.

"I have to warn Jeremy," she thought.

When 10-year-old Susan goes to a flea market with her parents, she is drawn to an elderly lady with a basket of crystals. A clear crystal gives her a tingle, and, although she tries to choose another, it keeps working its way into her palm. The woman gives it to her and is about to explain why it's special when Susan slips away into the crowd.

Asleep in the grass beside the family van, she wakes to find herself aboard a ship with a rough sailor shaking his hook in her face and ordering her out of the gangway. Farther down the deck she finds herself in the middle of a chase. One boy bangs into Susan, then accuses her of conspiring with the other youth, Slade, in an attempt to steal his knife. Susan uses kung fu to get the knife away from Slade and then goes looking for the owner who thinks she's a boy in "funny clothes."

Aboard ship, she meets the old woman from the flea market who tells her she is in the past, specifically 1864 and on an immigrant ship sailing for New York. "Your first crystal journey," she says. By grasping the crystal, which is in her pocket, Susan returns to the 21st century. "It was only a dream," she tells herself. Then, at home, on her dresser, she finds the knife.

Susan uses the crystal to slip back and forth between 1864 and the present day. Feeling sorry for the boy, so poor, cold and hungry, she puts food items into the pockets of a warm coat which she wears when she returns to him. Jeremy Faraday and his family were seeking a better life in the New World, but his parents and siblings died of a fever and were buried at sea. The knife is the only possession of his father's that he has.

“I see these novels," says author C. Rosemary Ludlow, "as a way to introduce young readers to other cultures and experiences, structured around some solid life lessons.” In A Rare Gift, the first of three novels (Pharoah's Tomb and Lady Knight), she achieves her objective. The elderly woman says that guardians of that crystal are "a force on the planet for righting events that have gone wrong... We help set wrong things right." At first, Susan shrinks from the challenge, but eventually she accepts the idea that time travel is a rare gift, and she uses it to save immigrant children from captivity and exploitation.

Although readers are told that Susan, the new guardian of the crystal, will be travelling to other past worlds, Ludlow wisely confines the time travel in A Rare Gift to the ship and to New York City in 1864. If too many past eras are brought into a single novel, it can be confusing, especially to young readers who don't know much history. In dramatic scenes with just enough authentic detail, the author depicts the plight of the poor in a dog-eat-dog era.

In Susan, Ludlow has created an active, empathetic girl who uses her skills to help those in need. Readers will find her convincing and likeable. Jeremy is a character with whom boys can identify.

Tea, one of the foodstuffs that Susan takes to Jeremy, turns out to be another kind of "rare gift". A tea tin of yesteryear is key to the novel's satisfactory conclusion. A Rare Gift is a great "blend" of evocative description, engaging characters and exciting plot twists. This novel was my cup of tea.

Ruth Latta has written three young adult novels. Her most recent novel, Grace in Love, (info@baico.ca) is for grown-ups.