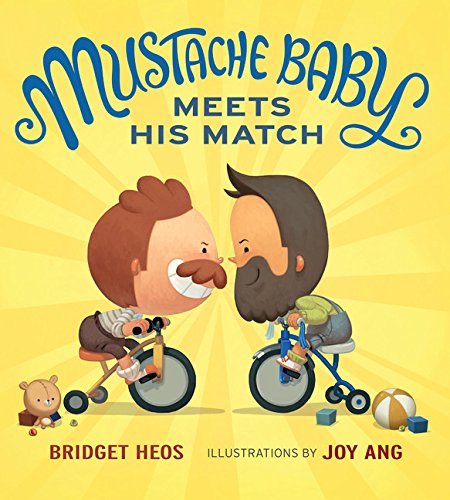 Baby Billy was born with a mustache.
Usually it was a good-guy mustache,
but occasionally it curled up at the ends
into a – well, you know. Good mustache or bad,
Billy’s family loved him.

Then one day,
Baby Javier came to town.
He was new and had a lot
to learn, so Billy decided to
show him a thing or two.

In terms of audience, Mustache Baby Meets His Match finds itself caught between a very young audience suggested by its board book format and an older group of kindergarten/early years children who might better understand the humorous contrasts created by Heos’ text and Ang’s illustrations (but who might be dissuaded from picking up the book because of its “baby” characters and physical format).

Essentially, the book is a very funny take on the theme of competition vs cooperation/collaboration (and perhaps sibling rivalry). Plot-wise, it would make sense that Baby Javier is actually Baby Billy’s younger brother, but, because Ang illustrates the two toddlers as being about the same size, it is possible that Javier is just a new neighbor. Regardless of the boys’ relationship, Billy decides he’s going to take newcomer Javier under his wing, teach him a thing or two, and make him his sidekick, in essence his subordinate. Billy has his own ideas about his place in the pair’s pecking order, and so an increasingly heated competition between the two begins, one that culminates in a physical lucha libre style wrestling match, complete with the boys wearing luchadores’ masks. And so, instead of Javier becoming Billy’s sidekick, he becomes Billy’s bitter rival. However, all is resolved when Baby Billy’s mother steps in:

“There, there,” his mother said. “Lots of
friends wrestle with competitiveness.
But sometimes the most important race
is being the first to say you’re sorry.”

Billy wins that race, and the boys reconcile.

And instead of being Billy’s sidekick,
Javier became his partner.

The book’s sometimes pretty sophisticated humour is rooted in the differences between what Heos’ words say and how Ang has imaginatively interpreted Heos’ text. For example, the two illustrations which accompany the review’s opening except evoke a scene from an old Western movie, that being the point at which two gunslingers meet, each prepared for a shootout from which only one will walk away the winner. Heo’s next words, “Like how he [Baby Bill] was the sharpest shooter in the West”, reinforce that earlier movie image, but now Ang switches things up by showing Billy dunking a basketball while Billy’s “work[ing] on the railroad all the livelong day” sees him putting together the tracks for his toy train. And when the text reads, “But this wasn’t Javier’s first rodeo”, readers see Javier astride a rocking horse while Billy mounts a stick horse. Readers also observe Javier “wrassl[ing] a bear (stuffed toy), “catch[ing] a fish with his bare hands” (gold fish cookies) and “chop[ping] down a tree in no time flat” (clipping the heads off flowers). When the pair go head-to-head in a number of competitions, “Billy put on a magic show and turned one cookie into two” (by breaking it in half) while “Javier made both cookies disappear” (by giving the pieces to his audience to eat). In their one-on-one art duel, Billy creates his version of Salvadore Dali’s “The Melting Watch” while Javier produces a painting resembling Vincent Van Gogh’s “The Starry Night”. In their final showdown prior to their wrestling match, “a motorchycle race (tricyles), mustachioed “Billy was ahead by a hair” as they rounded the final curve, but bearded “Javier won by a whisker.”

The clever text/art interaction makes Mustache Baby Meets His Match a fun, but sometimes demanding, read for a kindergarten-grade two children (if they can get past its physical format). Many younger listeners, however, will likely struggle with a number of the book’s allusions and plays on words.