How Big is an Elephant? 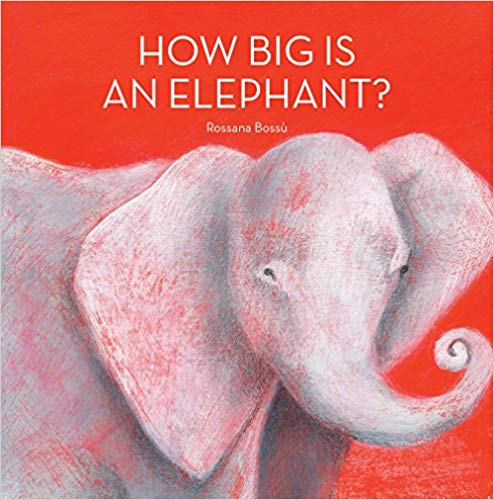 How Big is an Elephant?

1 alligator is smaller than a lion.
You need 3 alligators to make a lion

Originally published in Italian, this math picture book attempts to explain the concept of relative size to young children. Beginning with the comparison between an elephant and a polar bear, the animals become progressively smaller- elephant, polar bear, lion, alligator, penguin, lemur and flea- until the final question: “But what is much, much bigger than both?” The answer is a whale which is the same size as seven elephants, six polar bears, two lions, four alligators, nine penguins, ten lemurs and one flea.

The text is printed in a simple font using all capital letters. Illustrations on the left-hand page are basic renderings of the featured animal, but whimsy comes into play on the right-hand page which depicts a group of animals- or even, sometimes, just parts of animals (tails, for instance)- in an amusing way. For example, the three alligators which “make a lion” are wearing fake lions’ manes while the 1,127,003 fleas necessary to make a lemur are drawn as dots in pointillism, each flea a point in the rendering of the lemur.

Though young children will have fun naming and counting the animals, the idea of “big” as it pertains to the title and to the animals in the story can be a bit confusing. If the author is talking about comparative weights, then the claims are false. Is the comparison height? Length? Or is it just how many of one kind of animal will fit into a single one of another type of animal? Even that is rather questionable, for different species of animals- penguins and lemurs, for example- vary in size. But the target audience will not even be aware of these discrepancies (nor would they care) and will find this book an enjoyable, fun read.