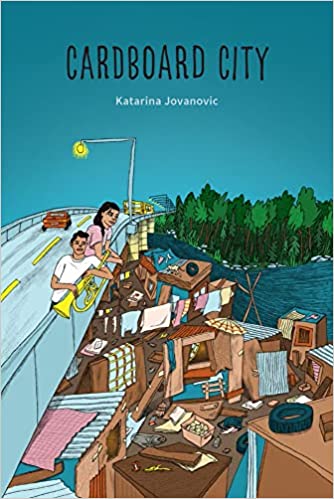 Baba woke him up early the next morning.

“Get ready!” she said, wrapping a slice of bread and garlic in her scarf. “Garlic is for luck. Bread is for the journey.”

“Where are we going?”

“I am not going anywhere. You are going to Guca. I am taking you to that man you met in the fairground. If I find that he is honest, you can go with him to Guca.”

“But Baba, I was thinking last night that I can’t go—you need me here.”

“Nobody will listen to me.”

“There is always somebody who listens. You need to go. We Romani say: Not all men are like trees; some must travel and cannot keep still.”

Nikola, 13, lives in an informal Romani settlement under a bridge in Belgrade, Serbia, with his grandmother Baba and his sister Saida, struggling to survive by telling fortunes and gathering paper for recycling. Nikola had learned to play his late grandfather’s trumpet but is unable to pursue his interest after Saida runs away, taking the trumpet to sell, until he meets Rika, a twenty-something trumpet player, who takes him to a trumpet festival. There, a famous trumpet player offers support to Nikola, and he is later reunited with Saida who manages to buy back the trumpet. Returning to Belgrade, Nikola and Saida move in with Rika and his girlfriend, Almira, and look forward to a more prosperous future. Meanwhile, they learn that Cardboard City has been dismantled and its occupants sent to temporary housing where Baba soon dies.

An English-language adaptation of a story previously published by the author in Serbian, Cardboard City brings the story of Europe’s nomadic Rom people to a Canadian audience, artfully depicting their rich culture as well as the grinding poverty and racism they face in several countries. Nikola, Saida, and their friend Spoon are introduced in sympathetic manner, as is Baba’s love as she is torn between keeping the family together and allowing her grandkids to escape poverty. The rich culture of Romani trumpet music, the festivals that accompany it, and Nikola’s passion for the music that allows him to escape, are all given the prominence they deserve in a story that touches on pathos, redemption, and marginalization.

However, the narration and the language of the book leave much to be desired. The time frame bounces all over, with several multi-chapter flashbacks that are poorly introduced and often unclear as to how they fit into the timeline. There is no clear narrator point of view that would tie the story together; in some cases, the reader sees the thoughts of secondary characters such as Almira, whereas, at times, Baba is inscrutable. The revelation that the poor runaway rescued at the festival by Almira is, in fact, Saida, and the subsequent reunion of the siblings, both suffer from poor setup and awkward suspense.

There is much confusion as well over the languages and cultures involved. When Spoon steals a pastry from a bakery, Saida calls him a “ludak ciganski” (“crazy Gypsy”), leaving the reader confused as to why she would use that racial epithet. Many of the non-English phrases used are obviously Romani, but it is unclear whether the Rom characters are speaking Serbian or Romani, in particular when interacting with non-Rom characters. Spoon is described as having a speech impediment, and somehow one of his mispronounced sentences involves replacing the English “th” with “z”. There is confusion even over currencies—most of the money encountered is in (Serbian) dinars, yet Baba is offered a dowry in euros for Saida. Even the spelling of names is confusing—Nikola’s surname is written in the text as Seich but spelled Saic on the Serb government letter transferring his guardianship. Most jarringly, it is not until near the end of the story that Almira (and presumably Rika) are referred to as non-Rom or gadjo. The reader would be forgiven for assuming that Rika, who plays trumpet and lives in a caravan, is a relatively prosperous Rom (the apartment he also owns and that he brings the kids to live in is also an awkward late revelation).

While Cardboard City does bring to our attention an oft-overlooked racial minority, one whose members occasionally seek refuge in Canada, and it presents a sympathetic and delicate story, its execution is flawed and needs work.

Todd Kyle is the CEO of the Brampton Library.