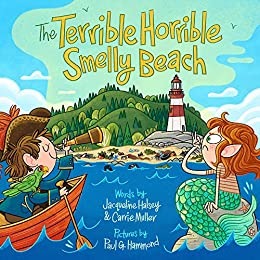 It’s been a while since this Maritime trio treated us to the story of The Terrible Horrible Smelly Pirate (reviewed in CM, 12 September 2008). This time the subject is a more serious one than the hygiene habits of a seadog. Here, we are dealing, albeit in a somewhat lighthearted fashion, with the pollution of waterways and shores as caused by human carelessness.

Mermaid is distressed by the state of her favourite beach, piled with garbage and far from pleasant to smell. The seagulls are not up to the task of clearing much away, and the sloshing waves, “splashing up and splashing down, frothing here and frothing there”, just move things around on the sand.

Mermaid sat on her rock. “It’s going to be a terrible, horrible,
smelly beach forever,” she cried. Big fat tears ran down
her cheeks and plopped into the waves, and turned into
sea glass.

Just then a rickety rackety pirate ship appeared through
the salty spray.

The pirates on the ship and in the company of their mascot, Parrot Polly, are searching for buried treasure. Mermaid poses three riddles to trick them into believing that the loot can be found on this very (messy) beach. All they have to do to find it is to get rid of the garbage and get out their shovels.

Trash bags in hand, the pirates set to work.

Tires and straws, wrappers and strings, and lots
and lots of plastic things…
all tangled up in stinky dead seaweed.

A big red X can now be seen on the sand, and, singing their pirate ditty again, the clean-up crew digs and digs and find, not a chest full of gold doubloons, but one overflowing with sand pails, sunglasses, and badminton rackets. In short, a treasure chest “full o’- FUN!”.

And that’s it: a rather abrupt ending, except for the short afterword in which the authors express their concern about the state of many beaches. They give some tips about how even young people, with a little direction from adults, can be involved in helping to alleviate the problem.

The text has a jaunty, irreverent tone. The illustrations, in loud colours and executed in a cartoonish manner, are lively and expressive. I liked the image of the pirates jumping up off the sand in excitement when they finally uncover the X on the beach. The absence of teeth in their grins strikes a realistically piratical note.

The Terrible Horrible Smelly Beach, an entertaining book for primary grades, will be a conversation-starter, and it might just provide the information needed for them to appreciate the effect that human trash has on beaches.