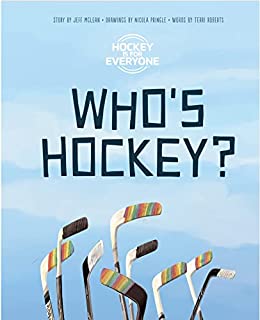 Cam is excited to finally start the game.
But something doesn’t look right.

She counts the players on each side and realizes the teams aren’t even.

“Oh no! We still need one more player!”

When Cam’s mother’s job change requires the family to move yet again, Cam regrets saying goodbye to her friends and especially her hockey team. However, the morning after arriving in her new house in a new town, Cam packs up her hockey gear, and, accompanied by her dog, Gordie, she sets off, saying, “Let’s go find some hockey!” At the local park, Cam sets up her goalie net on the outdoor basketball court and practices shooting by herself. When no one joins Cam and she’s about to go home, she shouts, “DOESN’T ANYONE PLAY HOCKEY AROUND HERE?” Her cry elicits a response from a girl, Lidia, who tells Cam that she’s never heard of hockey, an admission that prompts Cam to hand Lidia a hockey stick and seek her assistance in recruiting others so that they can have a game of ball hockey, a goal they ultimately achieve.

Who’s Hockey? is very, very thin on plot as the book is more about demonstrating the concept imbedded in the series title, “Hockey Is For Everyone”. Up front is that girls can play hockey. Age and size are also not to be impediments. When Cooper, Lidia’s little brother who has been previously excluded from playing sports with the big kids, wants to play hockey, Cam says, “Too small?” ... “That’s baloney! Hockey is for everyone.” Pringle’s art also visually reinforces the game’s inclusiveness with the kids being shown to be of different races (though predominantly white), with one girl wearing what appears to be a hijab.

Who’s Hockey? skirts one aspect of hockey that makes the sport, especially in its ice form, less inclusive, that of cost, as, in this instance Cam supplies all of the equipment. (BTW, where did that second goal net come from?)

The book’s title resulted from Cam’s saying, “I’m looking for hockey” and Lidia’s thinking Cam was looking for a person.