Unstoppable Us, Volume 1: How Humans Took Over the World 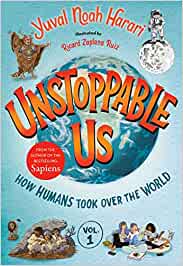 Unstoppable Us, Volume 1: How Humans Took Over the World

It’s quite strange that there’s just one kind of human all over the world. After all, in every country there are different kinds of ants, snakes, or bears. In icy Greenland, there are polar bears; in the Canadian mountains, grizzly bears; in the woodlands of Romania, brown bears; and in the bamboo forests of China, panda bears. So why is there just one type of human in all these places?

When historian and philosopher Yuval Noah Harari published Sapiens: A Brief History of Humankind in English translation in 2015, it quickly became a “phenomenal” bestseller and remained on the New York Times bestseller list for several years. It was translated into dozens of additional languages and adapted into a two-volume graphic novel. With Unstoppable Us, Harari has simplified his ideas for young readers in a magnificent, age-appropriate edition with pleasing illustrations by Ruiz and a graphically appealing hardcover that is worthy of an award for design.

Clearly identified as Volume 1, the current book covers the time period from the emergence of the last common ancestors of humans and chimpanzees six million years ago through the rise of different kinds of humans, the spread of humans and the extinction of Neanderthals, the last of the non-Sapiens humans 35,000 years ago to 15,000 years ago, a date that corresponded to the extinction of most large land animals in the Americas. Presumably a second volume is planned that will continue the stories of modern sapiens as they exist today with a peek into possible future conditions.

Harari concludes that two key developments account for the rise of Homo Sapiens as the only surviving humans and their spread to almost all corners of the globe. Cooperation allowed rather weak creatures to dominate their environment, even to the extent that they were so successful in hunting mastodons and mammoths that these large animals became extinct. A second key factor is the Homo Sapiens’ ability to invent stories and to imagine things that do not visibly exist. These evolutionary adaptations gave birth to languages, beliefs in gods and ways to work together to accomplish amazing feats from sending people to the moon to the invention of money and the reliance on corporations to produce things that we can consume. Because Harari knows that some of these ideas will be controversial, he is very careful in how he describes religious belief to minimize offense. It is safer to emphasize the mysterious story of the lion-headed man sculpture created about 32,000 years ago in Germany. Perhaps it is the image of a Great Lion Spirit that was a central figure in stories told and believed, and that helped the Sapiens of that place and time to cooperate in large numbers to eliminate their competitors, the Neanderthals.

Every pair of facing pages includes at least one colour illustration that is attractive and appropriate for the surrounding text. An interesting feature is the printing of selected texts using coloured inks (blue, orange, green, pale blue, red, dark green, purple, rose, peach, tan, grey and a couple more) for key sentences or parts of sentences. The colours are used sparingly on almost every page. The coloured text acts as a highlighter and may be used when rereading to skim through the contents. Additional features are a timeline of history and a world map of history that shows the migration of humans and the locations of key archaeological discoveries described in the book. The end papers are a designed like a giant petroglyph of cave paintings. No index nor bibliographical references are provided, but that may be fine given the target readers.

Unstoppable Us is a fascinating, page-turner of a book that introduces youngsters to rich ideas from anthropology, archaeology, sociology, philosophy, history and science. Readers will likely be impatient to see how Harari covers the growth of civilizations, industrial revolutions and challenges that humans face today, in part due to our own activities that despoil the only planet that we call home.

Val Ken Lem is the collections lead for the Faculty of Arts at Toronto Metropolitan University.