The Whale Who Swam Through Time: A 200-Year Journey into the Arctic 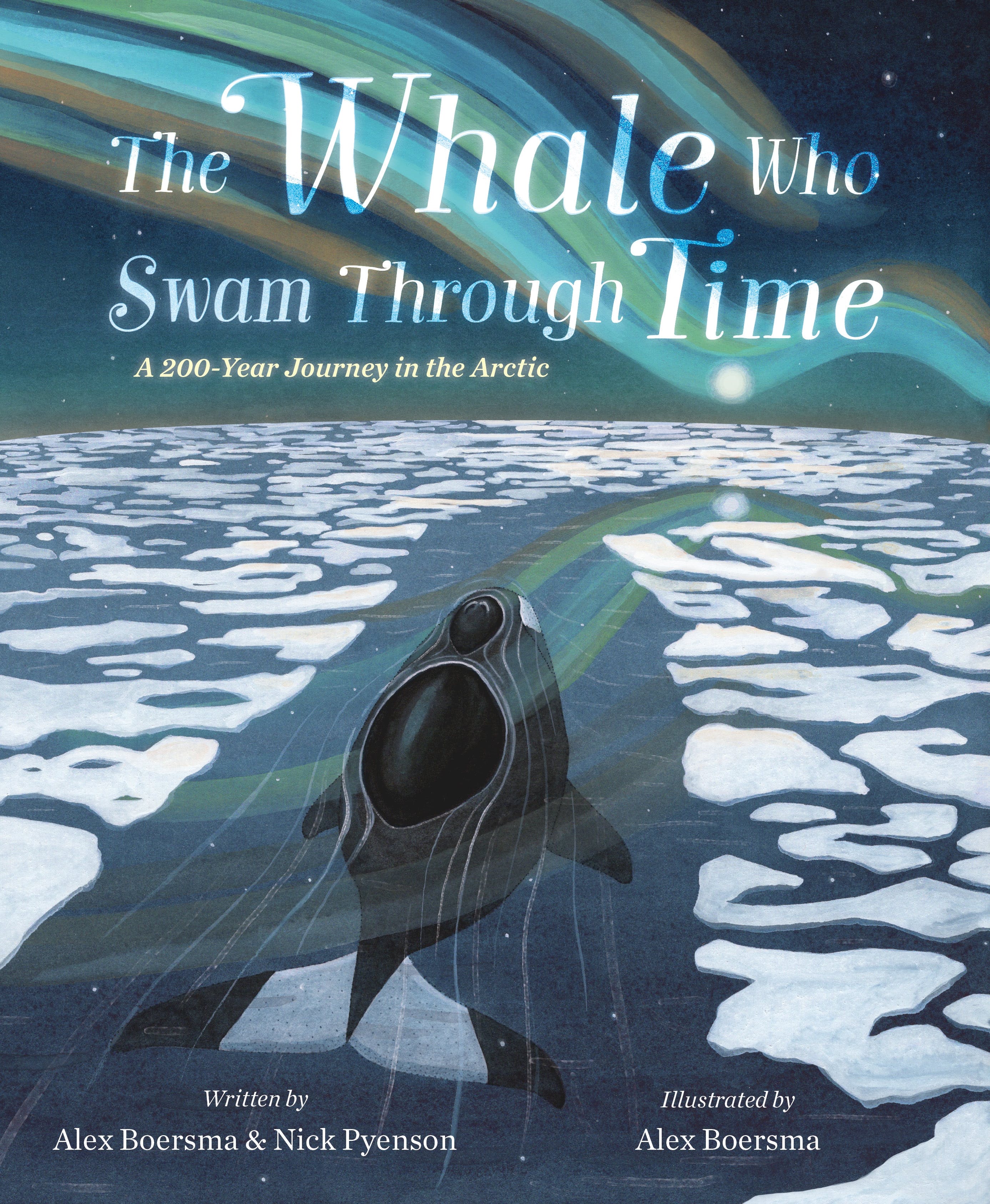 The Whale Who Swam Through Time: A 200-Year Journey into the Arctic

Each spring the sea ice retreats, and the whale migrates from open waters to a cozy bay.

She calls to her calf—the fifth one she’s had—and the sound travels easily in the calm water.

Other kinds of whales spend their entire lives in communities, swimming, feeding, and singing together. Bowheads make their own way. They may travel with other bowheads during the migration, but they don’t stay together long.

During the voyage, the whale’s blubber helps her float and store energy to nurse her calf.

But her blubber also makes her a target for whalers, who want to turn it into oil and food.

You’ve heard of insect species that have been around for millions of years: the cockroach comes to mind, at about 300 million years. But it’s amazing to learn that a single animal can live for more than 200 years! The bowhead whale is earth’s longest living mammal, spending its entire life in and around the Arctic. This fascinating book documents the imagined life of one bowhead, describing what she must have seen at various stages of her lifetime. And through that lens, we may better understand the impact of human activities on the world’s ecosystems and wildlife.

As the pages of this picture book unfold, we meet a bowhead born 200 years ago and follow along as she sees the occasional sailing vessel, as she swims past the igloo homes of indigenous dwellers, encounters thick sea ice and eats multitudes of tiny critters called copepods in her quiet Arctic home. At about 50 years of age, she’s had five calves and encounters whalers and more expanses of open water. Having survived the whale hunt at around 100 years of age, she has to dodge cargo ships and sees the increased development of human habitation along the shores. When she’s lived 150 years, she finds “the Arctic is getting noisier” with oil rigs, submarines and more shipping. And today, at 200, she faces warmer water, faster ships, pollution and abandoned fishing gear. What will the future hold for her offspring? Will they be able to survive as long as she has?

The “Author’s Note” that follows the illustrated portion of the book explains how we cannot really know “what it’s like to be a bowhead whale”, and so the best way to imagine that life is through the real changes in the Arctic environment over that period of time. A key question that arises is: how do we know these whales live so long? Four pages of facts are included at the back of the book, with evidence of indigenous hunting tools being found in whale carcasses being the first clues to that longevity mystery. There’s also information about how the whales feed and grow, how they communicate and what areas of the Arctic they frequent. What threatens bowheads today? You’ll read more about the human impacts of ships, noise, oil spills and disappearing sea ice, factors brought about largely by climate change. Many questions about bowheads remain unanswered. Some “Historical Notes on Inuit Peoples” follow, along with details about the Northwest Passage (melting ice makes this transit a viable trade route today), and how commercial whaling affected populations of various whales over time. Two pages list other Arctic animals and include a few details, e.g. polar bears, ringed seals, snow geese, cod.

The Whale Who Swam Through Time is nicely divided into a picture book format for the younger end of the readership range and the factual sections for older readers. A great deal of expertise is in evidence in both parts; carefully researched text by co-authors is enhanced with skillful, illuminating art. Most of the animated illustrations are infused with the blues of the undersea world, made appealing with accurate depictions of the whales and other creatures. They include many double-spreads, such as the dramatic image of the bowhead trying to evade the noise of ships and oil rigs. One illustration may give you pause: the bowhead is swimming away into the deep blue trailing lines of bubbles....it’s the only living thing in sight. In all that space, how can we have made such a devastating difference to the ocean’s wildlife? The images in this book will stick with you for a long time.

The double focus—the amazing tale of a very long lifetime and a telescoped look at the environmental changes of the past couple of centuries—are both intriguing and alarming. The Whale Who Swam Through Time is a wake-up call we should all heed to do our part for conservation so that such unique wildlife can continue to occupy the habitat it needs on the planet.

Gillian Richardson is a freelance writer living in British Columbia.