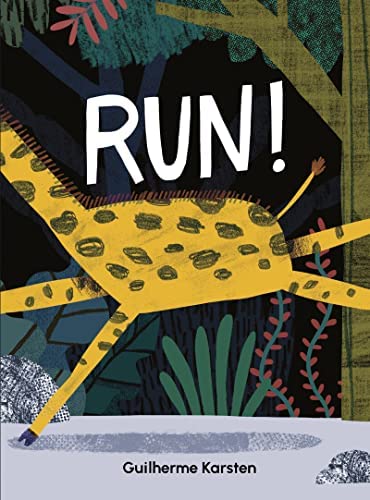 Your time is running out...

Using a magician’s skill of misdirection, Karsten appears to be telling one tale before revealing a delightfully amusing twist at the end, one that will cause youngsters to reread the book with an entirely new mindset. With a cover illustration revealing a giraffe running though a dark jungle, an image accompanied by the single word “RUN” rendered in large upper case letters and followed by an exclamation mark, young readers/listeners could conclude that the giraffe is fleeing from something. But from what and why?

As readers dip into the book’s contents, they will discover that the giraffe is just one of the jungle’s denizens that is responding to the command to “RUN!” A hopping frog, a slithering snake, a head-in-the-sand ostrich, a tiptoeing zebra, a crocodile, a gorilla, a lion, the cover’s giraffe, and an elephant all respond to a series of specific commands from an unseen source that begin with “Run” and include “Make no noise.” and “Leave no trace.” before becoming somewhat ominous sounding as in “I will not rest until I find you.” Visually, Karsten’s renderings of the animals’ eyes, in particular, can be interpreted as suggesting fear of the unseen speaker, thereby contributing to the misdirection.

Design-wise, through the giraffe pair of pages, the brief text stands alone on an all-white background on the recto while the facing page features Karsten’s collage illustration of the focal animal against a lush, dark jungle background. Beginning with the elephant, the book switches to spreads, with the stampeding elephant shouting, “HURRY, HE’S COMING!” The next two spreads, which include a text countdown from ten to two, reveal a jungle scene absent of animals. Increasing font size indicates that, as the countdown proceeds, the narrator is becoming increasingly more loud. Finally, as the countdown reaches “ONE!”, the source of the animals’ seemingly panicked running is finally revealed – a tiny mouse who shouts, “READY OR NOT, HERE I COME” But the book is not over as readers are silently invited to join in the mouse’s game of hide-and-seek. A closing textless spread is augmented by a foldout page, and, somewhere in these pages, youngsters can locate the nine animals that the mouse is now trying to find.

Run! is a fun read that will appeal to its intended audience.

Dave Jenkinson, CM’s editor, can be found in Winnipeg, Manitoba.