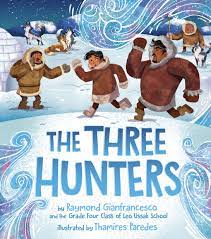 Iqaluit publisher Inhabit Media has added to its growing list with this new collaboration. Author and teacher Gianfrancesco, along with a group of grade 4 students, have used the classic story of “The Three Little Pigs” as a template for a cautionary tale set in the Arctic.

The first paragraph in the book lets us in on the setting immediately.

A long time ago – before there were houses and trucks,

before television and the Internet, before grocery stores

and the post office – the windy coast of Hudson Bay was

ice, water and snow; tuktuit, caribou and natiit, seals. A

community of Inuit lived and hunted along the coast.

They followed the tuktuit and moved along the ice in

One by one, three young hunters, having been taught in the traditional ways by the Elder Ukpikjuaq, go out to find game. The youngest boy, Ajagaq, sets forth on a seal hunt.

Ajagaq set off in the wrong direction, misreading the

snow drifts and the inukshuk signs made of piled stone.

The wind began to blow. It hit his face and stung.

He could see only white and hear only the wind whistling.

Ajagaq tries to set up his tent of caribou-skin but has trouble keeping it standing, until finally it blows right down.

“…Tuktu skins are far too thin

to keep me from coming in.”

taunts the wind. And now:

His hands were freezing, and his teeth chattered.

Ajagaq tripped on a rock and fell. He felt like he would

never get up again. He stuck his hands under his armpits

and shut his eyes tight. He could see Ukpikjuaq’s scowl.

He regretted not listening to the Elder’s words and having

fun instead of paying attention.

He is rescued by his second brother, Tiriaq, who scolds him for a fool and tries to make a more secure shelter for them by building a snow cave. But the wind continues to howl its threats.

“…A snowy hole is much too weak

To protect you from the havoc I’ll wreak.”

and the qulliq (seal oil lamp) refuses to stay lit. The eldest brother then arrives. Akkiutaq is relieved to find the other two still alive, both fearful and anxious and regretting their lack of attention to Ukpikjuaq’s teachings.

They collected the dogs and what supplies they could

find and set off. They drove through the wind until they

reached the warmth of Akkiutaq’s iglu. Inside the iglu,

they sat around the qulliq and ate dried tuktu…

“The work is done, my brothers. The iglu is strong and made

to withstand any weather. The piqsiq will pass and so will your fears.”

At last the blizzard abates and the three brothers are able to hunt down the seals they had hoped to find. They return to their settlement “with sleds full of meat” where they enjoy a community celebration.

Throughout the telling of the tale, the threatening weather of a bitter Northern winter takes the place of the classic’s big bad wolf. Instead of “I’ll huff and I’ll puff and I’ll blow your house down”, each brother is visited by the cold wind whose voice intones an ominous rhyme. The most threatening is the last one, heard inside from the shelter of Akkiuaq’s iglu.

Tuktu skins were not strong.

A little hole did not last long.

Your blocks of snow are no real match

for the power I’ll dispatch.

No brothers left, you won’t be saved.

My power and harm cannot be braved.”

This original story has the familiar cadence of a folktale and a smooth style that will engage readers, both those who know something of the traditional Arctic lifestyle and those new to the concepts and vocabulary used here. A one-page glossary of Inuit words at the end will aid in understanding. (The first time an Inuit word is used it appears in italics. If it is used again, it is not italicized.)

Bold graphic illustrations by Brazilian artist Paredes carry the narrative along, and the large hand-lettered text is invitingly easy to read. The human figures (the brothers are not children but an adolescent and two full-grown men) stand out clearly against the lightly-detailed but atmospheric backgrounds of blue, grey and black.

The Three Hunters is another worthwhile addition to school and public library shelves and a useful curriculum adjunct to studies of the North.