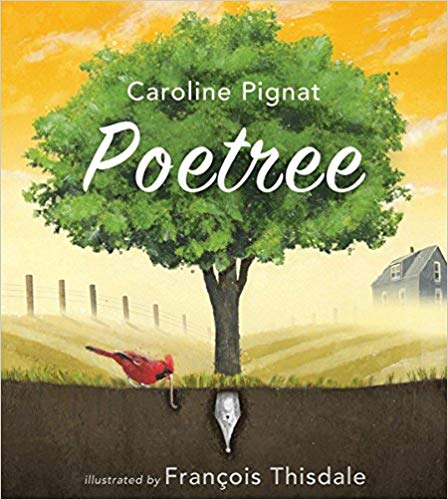 Poetree, written by Caroline Pignat and illustrated by François Thisdale, is a series of poems depicting the change and growth of the four seasons. Told mainly through acrostic poetry (with a rhyming couplet to introduce each new season), this collection is an ode to the beauty of nature and the wondrous cycle of the passing year.

Throughout this book, Pignat uses poetry in a simple but highly effective way to showcase the natural beauty of the seasons. The acrostic poems feature everyday words (such as the summer poems’ "breeze", "sunshine", and "rain"), that have been expertly shaped into evocative descriptions imbued with new meaning. "Sunshine", for example, details not the look or feel of the sun from a human's perspective, but rather from that of a growing tree:

Striving
Upwards
New
Saplings grow
Hopeful
In the light that
Nurtures
Everything it touches.

The poems are easy to understand, making them accessible to a wide range of readers. For younger audiences, this book offers a lovely look into the changing seasons while, for older audiences or those more interested in the poetic flow of the words, the sparse text is brimming with imagery that depicts the miraculous yet ordinary beauty of the natural world we often overlook.

François Thisdale's illustrations add another layer of depth and splendor to this collection of seasonal poems. The use of shadow and light—seen in the beaming sun as well as the misty figures of distant humans—brings the subject of each poem to the foreground. Additionally, Thisdale also utilizes colour to help capture the different sensations that accompany the changing seasons. The prominence of dark blues and purples as the snow sweeps in emphasizes the end of fall and the arrival of the bitter, frozen cold. Once the winter is settled, however, the colour scheme brightens to more lively shades of blue and green as birds take flight and a fox peeks out from behind a fallen tree. The quieting of the earth as the snow begins to fall, followed by the emergence of playful creatures once they are accustomed to the cold, is a marvelous example of how well the illustrations work with the text to create an enchanting view of the natural world outside our doors.

A wonderful collection for the classroom and for home, Poetree is a well crafted and immensely charming series of poems that showcase the quiet wonder and everyday beauty of the always changing seasons.

Meredith Cleversey, a librarian in Cambridge, Ontario, loves to read, write, and live in a world of pure imagination. http://google.com