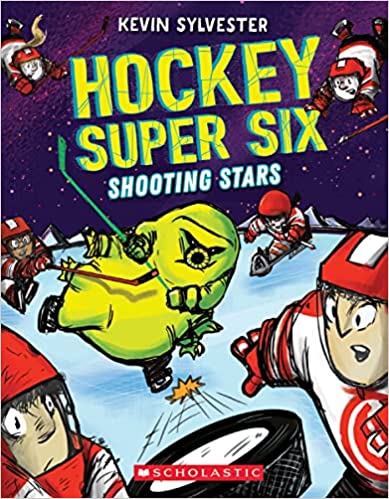 The view of the asteroid began to fill the window. It had started to glow faintly around the edges as it drew closer to the light and heat of the sun.

“It really does look like a huge hockey rink,” said the twins.

“Are those lines painted on the surface?” Starlight said. “But that’s impossible!”

Richard gave a quick cough, pulled back on the controls, and the asteroid disappeared from view. “Time to land.”

DJ whispered to Mo. “I hope he’s a better pilot than goalie.”

Mo chuckled. “So, Captain and Starlight, any idea what we do when we land?”

Richard fired the blasters to lower the ship and it began to fall slowly in reverse. He also leaned in closer to the kids.

“A few. For example…” Karl spotted Richard craning an ear.

He lowered his voice. “Maybe we skate at high speed in one direction.” He definitely saw Richard raise an eyebrow.

“It’s also possible,” Starlight added, “that we could use the force of our shots, or super-skating, to crack the asteroid into pieces.”

In Shooting Stars, the fourth book in the “Hockey Super Six” series, our heroes are sent rocketing into space with famed astronaut Pylon Richard in an effort to stop an asteroid that is hurtling towards the earth. The asteroid is supposedly being controlled by a new group of villains who worked with Clarence Crosscheck just before he was sent to jail. In order for the villains to agree to stop the asteroid, they are demanding not only money but the destruction of all the world’s hockey rinks. As usual, it’s up to the Hockey Super Six to save the day--- and to save hockey!

After quickly recapping what we already know about the “Hockey Super Six” series (a hockey team gets zapped by freeze ray and develops superpowers, for those not yet in the know), Shooting Stars launches right into a whole lot of all-new: all-new location, all-new characters, and some all-new jokes and features for readers to enjoy. This was a nice surprise as there is often a point in a series where things start to feel a little too repetitive. This book features the addition of helpful, funny, and to-the-point Appendices. The teacher in me can’t help but love when authors sneak text features into fiction books so kids can learn early how helpful they are. There is also an interactive element early on where the fourth wall is yet again broken and readers are encouraged to shake the book.

When the Super Six arrive in space, things are not as they seem, and they find themselves not only battling a new sort of monster (super-sized tardigrades), but facing their ultimate nemesis: someone who hates hockey. This tale quickly turns into a battle between brains and brawn, and the winner might surprise readers. There are lots of twists and turns, including help from a very surprising source. As usual, readers are treated to lots of punny humour, fun illustrations, and an occasional butt joke.

I think these books are getting better as we move through the series, and I trust that Kevin Sylvester will always have one more clever trick up his sleeve to keep readers coming back. They are so popular at my house that we now have TWO copies of this particular book because my hockey-loving kid bought it from the book fair so he could “have his own copy.”

Allison Giggey is a teacher-librarian in Charlottetown, Prince Edward Island.