Brady Brady and the Special Goal 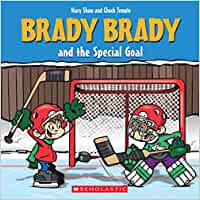 Brady Brady and the Special Goal

Brady was on a hockey team called the Icehogs. He was their leading scorer.

At the end of practice, Coach gathered the Icehogs on centre ice. “I have three important things to say,” he told them as he counted on his fingers.

“One, next week is our last game of the season. Two, we’re playing the dreaded Dragoons. And three, if Brady Brady scores one more goal this season, he’ll break the league record.”

Brady not only loves playing hockey, but he’s also a very good forward, one who has scored so many goals that he’s tied for the league lead in goals scored with just one game left to play. While all the Icehog players are emotionally supportive of Brady’s achieving that record, Chester, the team’s goalie, goes a step further and volunteers to come to Brady’s backyard rink in the days before the next game so that Brady can practice his shots. “The whole week, every single day, Chester and Brady practiced until just before the street light came on.” The night before the big game, the boys practiced even later into the evening.

“Thanks for helping me out,” Brady said, as he walked his very tired friend back to his house.

“No problem.” Chester sniffed. “What are friends for?”

The words “very tired” and “sniffed”, coupled with the Temple’s visual contrast of a “chipper” Brady and a “draggy” Chester, foreshadow what is to come on game day. To the team’s dismay, Coach announces that “Chester is sick in bed and won’t be able to make today’s game.” He goes on to add, “I’m going to need someone to put on the goalie gear and play in net for us.” When no one immediately volunteers, Brady steps forward, saying, “Chester wore himself out helping me. It’s my fault he’s sick...Chester didn’t let me down, and I’m not going to let Chester down.”

Shaw provides a satisfactory and believable ending as the Dragoons, down by one goal with just a minute remaining in the third period, choose to pull their goalie for an extra skater, and Brady, in clearing the puck after making a stop, has the puck hit the sideboards and then ricochet into the Dragoons’ empty net. Though Brady had reserved a special spot on his bedroom shelf for the record-breaking puck, Shaw, in ending the book, has him perform one more act of good sportsmanship and friendship.

Brady Brady and the Special Goal is another strong addition to the series, and Temple’s bold, detailed cartoon-style illustrations will continue to visually engage emerging readers.