Murder at the Hotel Hopeless 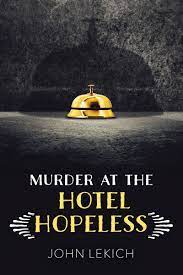 Murder at the Hotel Hopeless

The little dog was wearing a pink wool hat with knitted bunny ears. “Did you miss me, Baby?” asked Penny. “Do you like your new hat, sweetie?”

The dog looked up at me with sad eyes. They were the eyes of someone who has spent too much time trapped with Penny Price. Except for the hat, I was starting to look just like Baby.

Penny threw Baby’s rubber ball. The little dog chased after the ball and brought it back. Just like she always does. It is the only thing that makes Baby truly happy. “Baby loves to play fetch so much,” said Penny. “It’s our favorite game, isn’t it, sweetie?”

“Never mind about Baby,” I said. “Why did you interrupt my driving lesson?”

“Because something isn’t right about Mr. Ignato’s death,” said Penny. “There’s a sturdy handrail on that staircase. And Mr. Ignato held onto it all the time. Plus his cane was always in his other hand for extra support.”

“So he was always very careful walking down those stairs,” said Penny. “And the carpeting on that stairway has been frayed for ages. Mr. Ignato always avoided the worn patches by stepping around them. I saw him do it lots of times. Why would he fall now, Hopeless? Don’t you find that suspicious?”

“You watched Mr. Ignato walking down the stairs?” I said.

“I watch everybody,” said Penny. “As an actor, it’s my duty to observe human behavior. That’s how I overheard what you said to your mother on the stairs.”
“You were listening in on a private conversation with my mother?” I asked. “Why didn’t I see you?”

“Don’t you ever watch my show?” asked Penny.

“You weren’t supposed to see me. I was on a stakeout. You know what a stakeout is, right? That’s when a private investigator follows someone around without them noticing. You know, to get valuable information for a case.”

“I don’t care what you call it,” I said. “It’s not polite to listen in on private conversations.”

“There’s nothing polite about investigating a murder,” said Penny. She sounded just like the character she plays on her show. And then Penny said, “Back there in the car. You were crying, weren’t you?”

“That’s none of your business,” I said.

“There’s no shame in crying, Hopeless,” said Penny. “But from now on, you’re going to control your emotions. We have a crime to solve. Since I’ve broken my arm, you’re going to be my faithful assistant.”

“Faithful assistant? What do I have to do?” I asked.

“Whatever I say,” answered Penny. “Like opening the envelopes of secret messages. Or opening the door to a hidden tunnel. Things like that.”

“You just want me around to open stuff?” I asked.

“Exactly,” said Penny. “Don’t worry, Hopeless. I’ll do all the thinking.”
“You really think you can solve Mr. Ignato’s murder?” I asked.

“Why not?” said Penny. “I’ve solved dozens of murders.”

“On your show!” I said. “Pretend murders don’t count.”

“Sure they do,” said Penny. “You know the only difference between a real murder and one on a crime show?” she asked. “At work, the dead body gets up for a sandwich when we break for lunch. But the same basic rules of investigation apply in real life.”

Charlie Hope is a 17-year-old who has responsibilities. He and his mother own and operate a hotel in Vancouver, taking care of the long term guests and working hard to make a life. As part of Charlie’s work at the hotel, he is tasked with taking care of a more than spoiled 14-year-old TV celebrity named Penny Price. Charlie takes care of Penny and her Chihuahua, Baby, as she hides from the paparazzi tending to a broken arm and holding out for more money as the star of TV’s, Little Miss Murder. As if Charlie’s tending to Penny’s bidding isn’t enough, to make matters worse, her nickname for him is “Hopeless”. In his off time, Charlie makes a point of visiting with the other long term guests including Mr. Ignato with whom he plays chess. Nothing is really exciting in Charlie’s life until an unlikely accident sets things in motion that change Charlie’s life for good.

For all the times that Charlie’s played chess with Mr. Iggy Ignato, his favourite stories are about Mr. Ignato’s doorknob collection. Each of the doorknobs has a history, and Mr. Ignato has shown Charlie the collection many times. Of all the samples, Charlie never gets tired of looking at his favourite one - number 13. During one particular chess game, Iggy stops the game to tell Charlie that he thinks someone has been watching him. Charlie finds this a strange thing for a 75-year-old man to say, but Iggy tells him not to worry about it and that it’s probably his imagination. Charlie asks to see the doorknob collection, and Mr. Ignato goes to get it from its special hiding spot. Charlie eyes number 13 and, to his surprise, Mr. Ignato gives it to him, calling it a birthday present. Charlie happily accepts the special gift.

Hours later, Charlie hears a scream in the hotel and runs to the staircase. Mr. Ignato is lying at the bottom of the stairs, obviously hurt. Charlie rushes to his side and knows there is no time to call an ambulance. He leans into Mr. Ignato who can only sound out “Mur…room 22” before letting out his final breath. The investigators called it an “unfortunate accident”, that Mr. Ignato tripped on the stairs, hit his head, and fell to his death. Charlie knows there’s more to it than that.

As Charlie is doing his duty taking care of Penny, they start talking about Iggy’s death. Charlie shares with Penny his suspicions about the accident, and Penny agrees, saying that she’s watched Iggy (because she watches everyone to help her be a better actor), and it was nearly impossible that he fell. Charlie tells Penny about Iggy’s last words, and, together, the pair think that Iggy was murdered. Now they want to investigate, and that investigation starts with their looking around Mr. Ignato’s room. Once in the room, they find an envelope addressed to Charlie from Mr. Ignato. Inside is a VHS tape of Mr. Ignato who made the recording as a message to Charlie before his death. Mr. Ignato tells Charlie that he used to be a famous burglar and that he stole the Countess Grazelli diamond and hid it inside doorknob 13. Iggy continues on the tape to tell Charlie that the diamond is cursed, previous owners have been murdered, and Charlie’s best move is to hand it into the police. Charlie does want to hand it over to the police, but Penny convinces him that, together, they could find enough evidence to show that Iggy was murdered and then turn in the diamond. Charlie decides to hide the diamond by switching the number 13 doorknob with another doorknob on a small closet door in the basement of the hotel.

Penny and Charlie start their investigation. They decide to check out the hotel’s tenants beginning with rooms that start with 22. They visit a few rooms with no results and leave the investigation for another day. Charlie decides to check on the diamond, and, after going to the storage door and opening the secret compartment of doorknob number 13, he is shocked to find it missing! He confronts Penny who admits that she followed Charlie when he hid the diamond and she took it. Penny tells Charlie that she’ll need the money because her career is ending and she just can’t live on a budget. Charlie has had it with Penny and refuses to have anything to do with her.

Charlie spends time helping other tenants in the hotel and strikes up a conversation with Lindsay whose uncle, Ned, has come to visit. Ned tells Charlie that he and his investors are considering buying the hotel from Charlie’s mother and fixing the place up. Ned still has some inquiries to make and asks Charlie not to tell his mom but does ask Charlie to show him around the hotel so he can get a clearer picture for his investors. Weeks go by, and Charlie has almost forgotten about the diamond and Penny. But just as things are starting to go well, there is a fire in Penny’s room. At first, Charlie blames it on Penny, but she tells him that she was asleep and that someone had clearly gone through her room looking for something. Charlie asks about the diamond, but Penny reassures him that it is safe and sound. Also, Penny thinks she knows who started the fire - the same person that killed Mr. Ignato!

Through Penny’s careful observations, she tells Charlie why she suspects that it is Lindsay and Ned who are looking for the diamond. They sneak into Lindsay’s room when she and Ned are away and look for clues. They find out that Ned isn’t Lindsay’s uncle; Lindsay was hired to spy on Charlie, and they know that Charlie has the Countess diamond. They decide to check Ned’s room as well, and, there, Charlie finds a picture of Ned with one of Mr. Ignato’s old friends who was the only person that knew Iggy had the Countess! Just as Penny and Charlie are putting things together, Ned surprises them by entering the room holding a gun. After a brief confrontation, Penny ends up giving Lindsay and Ned the Countess. To ensure that the police won’t be called, Ned says that he’s taking Baby, Penny’s dog, with them as insurance. Lindsay and Ned leave with Baby, and Penny tells Charlie that she gave them a fake diamond and that she’s been hiding the real one in her arm cast.

It doesn’t take long for Linsday and Ned to figure out they’ve been duped, and they call Charlie, threatening to kill Baby if they don’t get the real Countess. Charlie and Penny agree to meet them at a warehouse for the exchange. On the way, they call the police. As they enter the warehouse, Ned asks for the diamond. Penny tosses a small bag with the diamond in it along the floor, but, before anyone picks it up, Baby jumps from Ned’s arms, takes the bag in her teeth, and runs to hide. Ned takes a shot at Baby, but Penny pushes him so that he misses. Then the police arrive. They arrest Lindsay and Ned, and, after Penny finds Baby with the Countess, she turns over the diamond to the police as well.

With all of the publicity, Penny gets even more admirers and her career starts to take off again. And, since they returned the Countess to the Italian government, Charlie and his mom receive a huge reward and are able to pay off what’s owed on the hotel.

This short novel is a fun adventure with all of the twists and plot turns of a larger story. Lekich does well balancing a tale about two unlikely teenage friends trying to solve a mystery in an adult world. The characters in Murder at the Hotel Hopeless are believable, and, although more depth could be added, for the length of the novel, the reader is able to see some development by the close of the story. This murder mystery would be a great read for anyone that is looking for a story that checks all the boxes and has all of the loose ends tied up.

Penta Ledger is a teacher-librarian at Gravenhurst High School in Gravenhurst, Ontario.