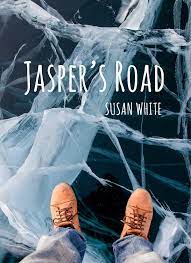 As the three boys came through the door, Ryan knew right away that something serious had happened. Anderson wrapped in Hudson Bay blankets, looking like a colourful striped mummy, was of course the first clue. Jake began the animated explanation of how amazing Jasper had been, how he had kicked in instantly, knowing exactly what to do.

Jasper and Anderson stood mutely allowing Jake to tell the details as if every word were true. Rachel limped to their sides, sobbing and hugging each one. Minutes later, when Zac came through the door, he was quickly caught up in the drama of the situation.
“Your son is a hero,” Ryan said. “I should have been watching. I sent them outside, I should have told them to stay off the ice.”

“Oh my God, Anderson, what were you thinking? I tell you all the time how dangerous the ice on that lake is. Oh my God Jasper, you must have been scared to death.”

Jasper’s Road is a sequel to Ten Thousand Truths and Waiting for Still Water. The series focuses on the Walton Lake Road community originally brought together over a period of three decades by Amelia. Amelia fostered dozens of children, mending their hurt lives. Many of them are now married, loving and encouraging the next generation of needy children. In Jasper’s Road, Amelia has been dead for five years, but her presence is still a constant as frequent flashbacks reveal her own troubled life and the warmth and kindness that were her trademark.

Set at the beginning of the pandemic, the story focuses on the relationship between two young teens. Jasper, adopted by Zac and Jodie as a baby, is happy in his adoptive family. However, his equilibrium is disturbed when Jake Turner becomes a foster child to Ryan and Rachel nearby. Jake is hostile toward Jasper, and Jasper resents the constant praise heaped on Jake’s excellent culinary skills. Jasper is unaware of Jake’s own sorrow regarding his little brother Tommy who has been adopted elsewhere. Tension increases when Jake saves Jasper’s brother from drowning, instead publicly crediting Jasper with the rescue, putting Jasper in a difficult position.

Both boys are believable three-dimensional characters, with the tension between them capturing readers’ imagination as their inner wounds are revealed. Their situation also impacts some of the adults who wrestle with their memories of the past, but, nevertheless, they stay strong for the younger generation, making the community one of strength and caring.

The large number of multi-generational characters appearing from the earlier titles was initially confusing, and a cast list would have been welcome. Jasper’s Road is not always an easy read, but it is a worthwhile one that highlights the fact that families do not have to be conventional to work. Jasper’s Road is a good addition to all libraries as a read-alone, but it would have extra impact if purchased in conjunction with the earlier volumes.

Aileen Wortley is a retired Children’s Librarian from Toronto, Ontario.