The Book of Elsie 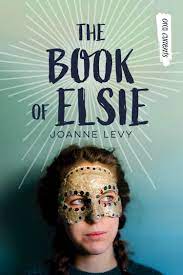 The Book of Elsie

When we pulled up to the temple to collect our baskets, I knew right away that something was wrong. Not just because of the three police cars in the parking lot. Or by the six police officers standing by the front door. Or by Rabbi Alisha there in her coat and hat, frowning. Her face was all red. She was obviously upset. Her arms were crossed, and she kept nodding as one of the officers talked to her.

Those things were all part of it, of course.

But when Abba turned off the car and swore? That’s when I knew something was really, really wrong.

“Abba?” My heart began to race. My whole body filled with dread. Whatever this was, it was bad.

“Stay here.” He got out of the car and started walking quickly toward the group. That’s when I saw the red, spray-painted symbols on the temple doors.

I knew what they were. Swastikas.

Elsie can hardly wait for the Purim party at her synagogue. It’s her favourite celebration. Everyone wears a costume for this Jewish holiday. Elsie wants to dress up as Queen Esther who saved the Jewish people in ancient times and is someone Elsie considers to be a superhero. Then Elsie finds out that the party is being cancelled because the synagogue can’t afford it. In fact, the synagogue, itself, might have to close because it is too expensive to pay for upkeep on the building. Elsie feels as if her world is falling apart, and she comes up with several ideas of how they can save the Purim party and, maybe, even the synagogue.

Elsie is lively and spirited and full of plans and determination. One idea she comes up with is to sell tickets to the Purim party in advance and invite the whole community to attend. Inviting non-Jewish people to the celebration will give them a chance to get to know how great Jewish people are, Elsie surmises, and they get to come to a fabulous party, too! What could be better? Rabbi Alisha agrees that this idea might work and has tickets printed so the synagogue members can sell them. As Elsie and her friend, Grace, go door to door to sell tickets to the Purim party, they encounter antisemitism and racist remarks. Elsie and Grace are shocked, hurt and horrified that some adults would treat the girls so terribly when they don’t even know them.

The Book of Elsie explores Jewish family and community life and gives a realistic and candid view of how antisemitism personally affects people. There are many light moments in the story, too, given Elsie’s lively personality, moments which help give the book an upbeat feel while, at the same time, still exploring antisemitic acts which happen in the world. It is also interesting to note that Elsie’s parents are two men who adopted her as a baby. The author does a great job of making this just part of the story of a young girl with two dads – it’s not a big deal – it’s just the way it is, and it doesn’t become a focal point of the plot.

The Book of Elsie is part of the “Orca Currents” series which publishes high-interest, simpler vocabulary stories written for middle school students who are reading below grade level. This Orca series focuses on current topics which are affecting many people today and which young readers might be interested in reading. The Book of Elsie gives middle school readers a glimpse into the life of a young Jewish girl, a look at part of her culture, and the antisemitism she and her family face through acts of vandalism and harassment. The story allows readers to find the space to ask questions and have conversations about racism and antisemitism in society.

Mary Harelkin Bishop is the author of the “Tunnels of Moose Jaw Adventure” series as well as many other books, including her Reconciliation books Mistasinîy: Buffalo Rubbing Stone (2016) and Skye Bird and the Eagle Feather (2017), published by DriverWorks Ink. She revised and republished Tunnels of Time, “Moose Jaw Adventure # 1", with DriverWorks Ink in September 2020 and Tunnels of Terror, “Moose Jaw Adventure # 2", in September 2021. She is currently working on revising Tunnels of Treachery for release in the fall of 2022. Always busy and interested in kids and writing, Mary is currently undertaking writing projects with schools as well as mentoring adult writers and doing author presentations. Currently, she is also teaching classes at the University of Saskatchewan. You can find Mary on her website – maryhbishop.ca, or Facebook and view video clips on her YouTube channel, TikTok and Instagram. You can also find her books on the DriverWorks Ink website.