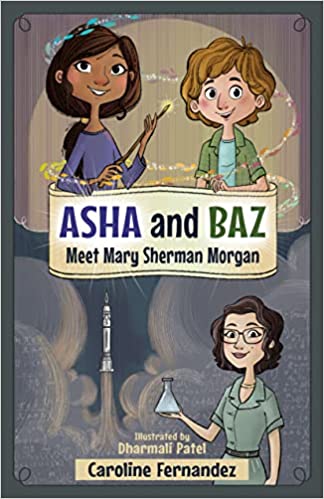 Asha and Baz stepped into the rocket ship. Asha touched the stick to the sand as if she were pressing a button. “Blast off!” she yelled. In that exact moment, the south wind blew sand into a gentle tornado around them. Asha and Baz were transported through space and time.

“What was that?!” Baz exclaimed as the mini tornado died out.

“On second thought, never mind,” Baz said taking a few steps back in fear. “I don’t want to hold the stick after all.”

“Look,” Asha said pointing down to the sand. “The rocket is gone.”

The rocket ship drawing had disappeared with the tornado, and written in its place was a name and a year:

Asha and her best friend Baz are excited to work on a science project for their favourite teacher, Ms. Wilson. Their task is to make a paper rocket fly the farthest using specific items. The winners of The Great Rocket Challenge will meet Canadian astronaut Chris Hadfield at the school assembly. Baz is “the smartest kid in science class” while Asha is “creative and curious”. They decide to make a “light yet solid rocket” using paper, a pencil, and some tape. However, they soon encounter a roadblock. How will they launch their rocket?

While debating ways at lunch to launch their rocket, they find “an extraordinary stick” lying in the schoolyard. The stick is polished and shiny with “an interesting bend to it”. Asha takes the opportunity to draw a rocket in the sand. The friends step into the drawing and are magically transported back to 1957 California where they meet Mary Sherman Morgan.

Asha and Baz find themselves at North American Aviation. Mary Sherman Morgan is working at this facility on a project to launch the first American space satellite. There is some urgency to the task because the Americans are behind in the space race. “There are currently two great powers in the world. The Soviet Union and the United States of America. And we are competing to be the greatest! Each of us wants to be better than the other.” The Soviet Union has already launched Sputnik, the first satellite into space. Mary and the team of nine hundred male scientists are working on the Jupiter-C rocket, but they have not been able to launch it.

Mary discusses the engineering issues she is facing to launch the rocket. She tells Asha and Baz that there are three requirements, “Availability, Data, and Pressure”. Despite her determination and knowledge, Mary is not respected at her workplace. Even Joe the janitor says, “Everyone knows girls can’t launch rockets.” But Mary is determined to achieve her goal. She tells the friends, “Anyone can do anything, if they put their mind to it.” Asha and Baz work with Mary to solve the engineering issues of her satellite and use that knowledge to solve their own paper rocket launch problems.

This short novel is the first in the “Asha and Baz” series from Common Deer Press. The two friends share enthusiasm, curiosity and determination to solve complex problems. When they discover a magic wand, they travel back in time to meet scientist Mary Sherman Morgan who was instrumental in the launch of the first American satellite in 1957. Despite misogyny, sexism, prejudice, and outright disdain, Mary overcomes many obstacles to discover the launch fuel formula for the Jupiter-C. Her male counterparts denigrate her contributions and ignore her ingenuity. She is not recognized for her contributions or rewarded for her efforts. The leader of the project, a Colonel, states, “Women have no business playing around in science!”

Readers who are familiar with the “Magic Treehouse” and “Canadian Flyer” series books will enjoy the time travel elements of this novel. There is an interesting examination of the early days of American space travel and the role of women in this scientific effort. The novel has short chapters, accessible vocabulary, and black and white illustrations which enhance the narrative. The Appendix gives readers a timeline of the space race between the Soviet Union and the United States, biographical details about Mary Sherman Morgan and Chris Hadfield, as well as resources about space. Asha and Baz Meet Mary Sherman Morgan is the first novel in the series which will appeal to both male and female readers who enjoy technology, innovation, and science.