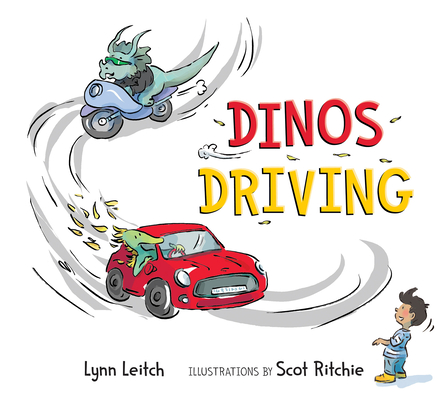 Spread by spread, one brightly-coloured dinosaur after another can be seen steering some kind of motor vehicle across the viewer’s horizon. Safety is definitely not first as the animals race motorcycles or perch atop something on four wheels which is much too small for their bulk. We go from the velociraptor in a decal-covered Austin Mini to the T-Rex zooming along on a so-called ‘monster truck’ which looks more like a toy under its weight, with machines like a limousine and a school bus in between.

The cartoon-like beasts entertain viewers with their lollipop hues and their goofy expressions. Each image is accompanied by a single sentence which includes the name of the dinosaur and what it is driving, but we are squarely in the realm of imagination rather than information here. At the end, the brachiosaurus gets a bit more coverage. This long-necked, long-tailed dinosaur is shown not driving a car but throwing one up and down in a playful way. Why?

She doesn’t drive yet. But as soon as she’s old enough,
she wants a little green jeep. With a sunroof.

The final pages lay out images of all the dinosaurs mentioned, each captioned with one of its most notable characteristics, followed by a sunset view of a few more dino-driven vehicles. They tootle past a palm tree and along a highway with two active volcanoes in the background.

The author has ended the book with a page directed at parents and care-givers with ideas for expanding on the use of the book through discussion and activities.

Ritchie’s illustrations are definitely the star here. Dinos Driving would be an entertaining addition to picture book collections for young ones interested in both dinosaurs and things that go.