Why Humans Build Up: The Rise of Towers, Temples and Skyscrapers 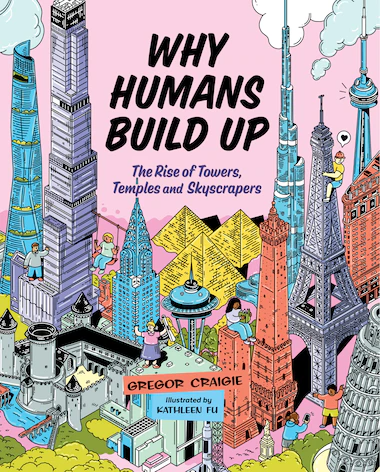 Why Humans Build Up: The Rise of Towers, Temples and Skyscrapers

At the University of British Columbia in Vancouver is an 18-floor student residence called Brock Commons Tallwood House that was built out of wood. Tallwood House includes laminated wood floors that are connected with steel brackets to laminated wood columns. One of the reasons wood wasn’t allowed for tall buildings in the past was the worry about fire. It’s true that wood can burn faster than other materials. But scientists, fire-fighters and safety experts tested the heavy laminated timbers and concluded the outside of the timbers would get charred by flames but would not burn easily because they are so thick. The wooden walls are also covered by three or four layers of fire-resident gypsum wallboard, and the building contains a backup water supply in case the power goes out. (p.78)

Why Humans Build Up: The Rise of Towers, Temples and Skyscrapers is one of the best of the genre of non-fiction books written to engage and educate readers of all ages.

Organized into eleven chapters, each section in “Why Humans Build Up” gives an answer to the question “why”, with examples through history and from around the world.

ONE: Security: Building Tall to Save Space
TWO: Spirituality: For Those who Dream of the Heavens
THREE: Ingenuity: Structures as Inventive as They are Tall
FOUR: Utility: Sometimes Being the Tallest Thing Around is Useful
FIVE: Rivalry: Competition to Build Sky-high
SIX: Beauty: Built to be Beautiful
SEVEN: Industry: Rising Up to Get the Job Done
EIGHT: Observatories: Building a Bird’s-eye View
NINE: Luxury: Creating Extravagant Homes High in the Sky
TEN: Efficiency: Using Less Land by Building Up
ELEVEN: Sustainability: Can Tall Buildings Help Us Save the Planet?

The answers are detailed and varied with many examples, including a good quantity from Canada.
Why Humans Build Up also includes a glossary, a list of print and online resources, and acknowledgements. This review is based on an advance copy with blank pages for the index to be added before publication.

Also included throughout the book are sidebars titled “Highlights”, and “Building Blocks”. For example, a “Highlights” box titled “Towering Totems” explains the origins and details of the Pacific Northwest totem poles, carved “to represent their history, families and stories”, and also explains the historical attempt to ban the practice.

[T]hey were banned for many years by white governments that attempted to forcibly assimilate Indigenous Peoples into mainstream North American culture. A new generation of carvers is again creating beautiful poles, but First Nations communities are still trying to retrieve the totem poles their people lost to museums and collectors around the world. (p17)

Illustrator Kathleen Fu’s colourful drawings add just the right touch of humour to prevent the text from becoming overwhelming. In addition, the current and historical photos included complete the book that will appeal to all ages.

Over the course of history, building up has evolved for many reasons, reasons that still apply today. With current issues such as climate change, population growth, and sustainability reaching critical importance, Why Humans Build Up: The Rise of Towers, Temples and Skyscrapers is the right book at the right time for critical thinkers of all ages.

Dr. Suzanne Pierson is a retired teacher, librarian, and principal living and reading everything she can get her hands on in Prince Edward County, Ontario.