The Secret Diary of Mona Hasan 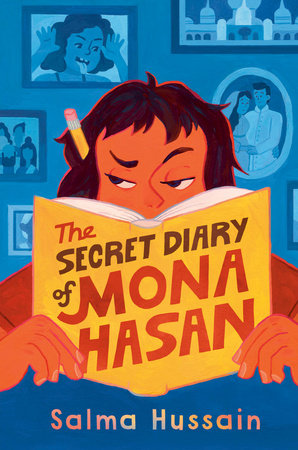 The Secret Diary of Mona Hasan

Nothing exciting ever happens in the UAE, but there is bad news happening all around us. There’s lots of fighting going on and the latest ones to enter the boxing ring are Iraq and Kuwait. They started fighting last summer and are still at it this year! Because of their fighting, satellite dishes have popped up everywhere and we now have a new American TV channel showing us the bad news nonstop. This new channel’s motto seems to be “Why worry later when you can worry right now? All the grown-ups in the UAE watch the news and read three different newspapers in two different languages every day. Everyone wants to know: Is the bad news moving closer?

In the back pages of today’s Gulf News, I noticed a box with a thick black border, a pointy leaf, and an announcement in rhyme:

MAKE HASTE AND DO NOT DELAY.

It’s 1991, and grade six student Mona Hasan lives with her family in Dubai where her father is a successful banker. As Muslims (albeit secular), the Hasans are accepted in UAE society, but, as Pakistani passport holders, the family fears for their safety with the growing unrest in the Middle East. Mona’s 1991 diary recounts the events around her from her own limited perspective: her mother’s discomfort with the restrictions placed upon her as a woman; her father’s fears about immigrating to Canada (as a child he was a Bangladeshi refugee who walked to Pakistan); younger sister Tutoo’s idolization of Mona (despite the fact that Mona often complains about her); and her father’s work friend, Uncle Annoying, who Mona is quick to recognize as abusive toward both her and her sister. Once the family gets clearance to immigrate to Canada, they travel to Pakistan for the summer to say goodbye to relatives, finally leaving Dubai for Canada in the fall. They settle in Nova Scotia where Mona’s father runs a gas station, her mother has difficulty adjusting to Canadian life, and Mona finds many of her classmates and teachers harbour discriminatory views towards new Canadians from away. At the same time, Mona is a typical 12-year-old: embarrassed by her parents, annoyed by her sibling, and crushing on cute boys.

Mona is a well-developed, believable protagonist. She is smart (and she knows it); curious about the feminist ideas her mother subscribes to; and appreciative of her Pakistani cousins and grandparents, even though they live in relative poverty compared to Mona’s family. Subplots involving Mona’s maternal grandparents (who look down on Mona’s Bangladeshi relatives); Mona’s coming to terms with her mother’s pregnancy; and her adjustments to life in Canada (where she sees snow for the first time) add to the story’s appeal. Hussain’s strength lies in her positive portrayal of Pakistani culture; the depiction of the many and varied microaggressions experienced by immigrants; and the sad realization by Mona’s parents that, while their futures may never be as successful as they were before immigrating to Canada, they have opened doors and possibilities for their children. The Secret Diary of Mona Hasan, an important story delivered with a light touch, will be popular with middle graders.

Kay Weisman is a former youth services librarian at West Vancouver Memorial Library and the author of If You Want to Visit a Sea Garden.