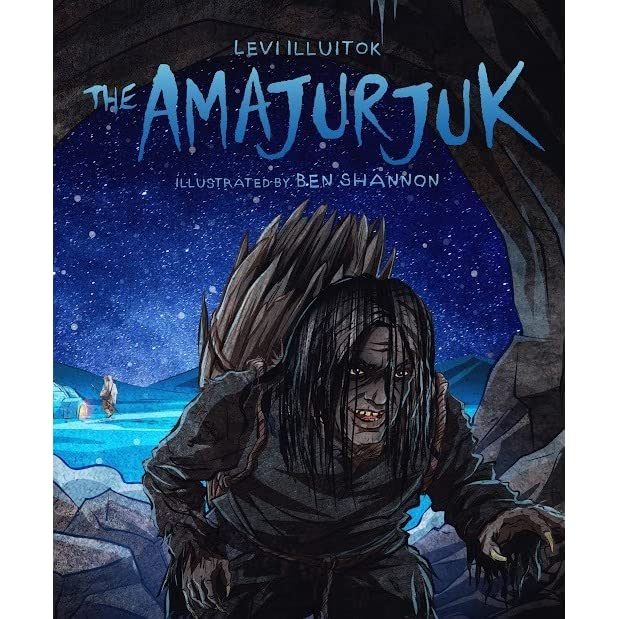 Japan has its oni, European tales mention ogres, and, in the Gambia, listeners are warned to beware of the Ninki Nanka. In the Far North, it is the amajurjuk, a terrible looming figure who steals children, who is to be feared.

In this simple sequential narrative, we learn of one such abduction. A crying toddler is stolen from her blind mother from inside their igloo. The woman is distraught about what has happened, realizing that the sound made when the amajurjuk exited the igloo with her wide wooden amauti* was a sign of what had happened.

[*amauti: the pouch worn over the shoulders, usually part of a parka, for carrying a child]

That night, the woman’s husband returned home, and

she told him when he walked in, “Our child has been taken.

I was unable to tell what it was. I did not know.

When she asked for our child, I said yes,” she said, sobbing.

The father goes out to search for the child, using “his magic” to track the Amajurjuk to a cave among some fallen boulders. He finds the pair, the child tethered to her captor with a braided sinew so that she cannot escape.

The father recognized his child, but he was unable

to go any further without being seen by the amajurjuk.

As the child went inside, the father thought he would hide

and make himself as small as possible amongst the rocks.

The next time his child came out, he would rush to grab her.

When the little girl appears again, he unties the sinew from her ankle and binds it around a rock. The two hide, and the amajurjuk reappears. She is confused at the disappearance of the child and is then driven off by a bird who threatens to eat her big toe, leaving her child-stealing basket behind.

The stark retelling of what we can assume is a traditional tale (there is no note about the roots of the story) contains a few colloquial phrases. Reading constructions such as “when he was pretty close to the opening” and “[the rock] would not budge” allows us to envision an elder sharing an old narrative with a contemporary audience. On an interesting cultural note, there is the line, “Even though he was a man, as soon as his daughter came out again, he put her into the back of his parka and ran away”!

Although the story is a very simple one, the dark illustrations with the truly frightening figure of the amajurjuk at its centre might prove to be too much for very young readers. The pictures, executed by prolific artist Ben Shannon, have the feeling of belonging in a graphic novel. They focus on the human characters beset by the terrible monster, with all their lively facial expressions, set on plain yet atmospheric backgrounds.

At the back of the book, a page explains the pronunciation of the Inuit words embedded in the story.

The Amajurjuk is an additional title for folklore collections or for libraries building resources on Northern Canada.