My Love for You is Always 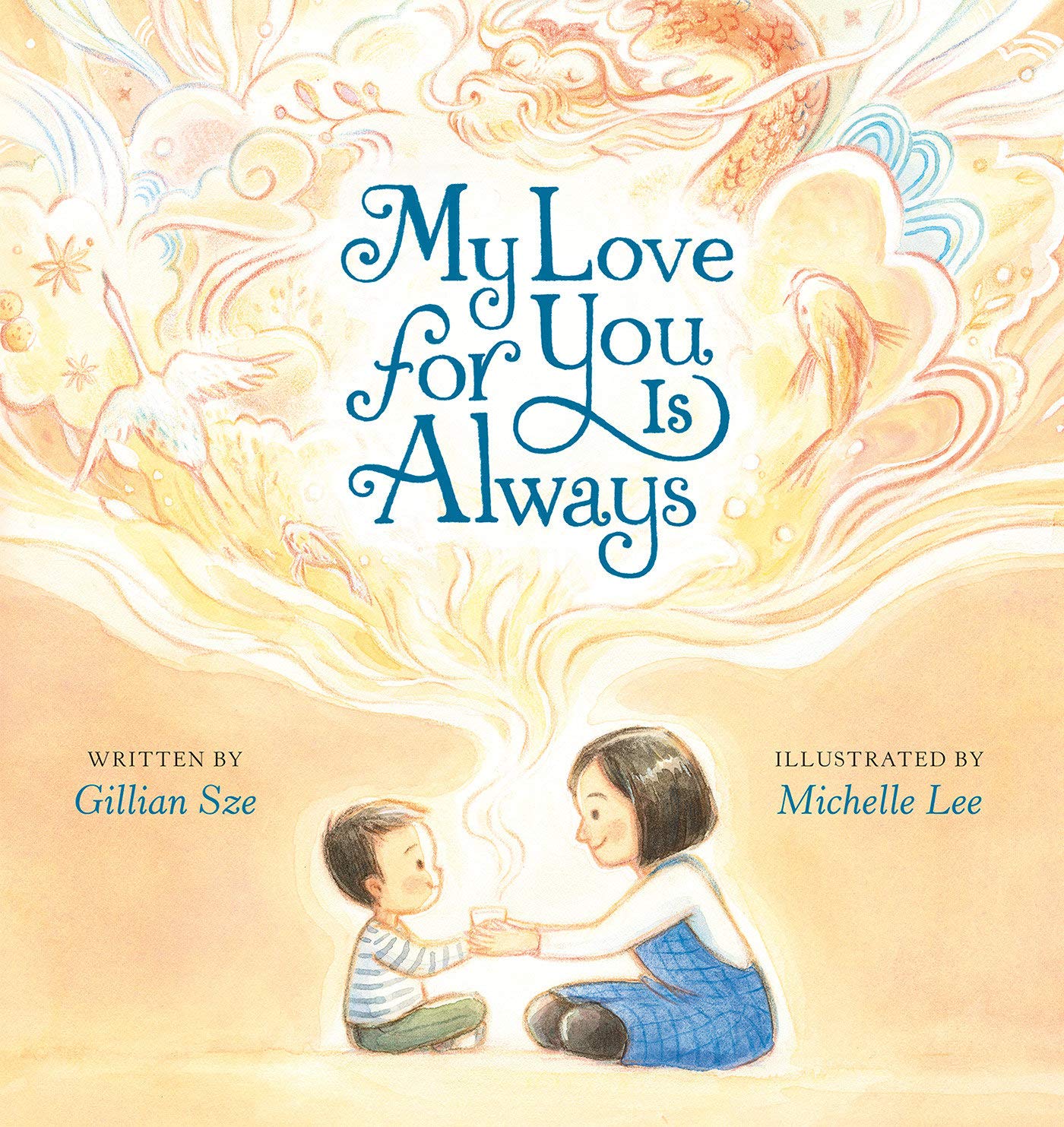 My Love for You is Always

Mmm, it tastes sweeter than the red dates I put in your soup. My love is that savoured first bite of spun sugar.

In recent years, a growing number of picture books published in Canada exemplify the diversity and range of Asian communities’ perspectives, histories, and contemporary experiences. These include topics such as immigration, culture, and identity, among others. For example, Nhung N. Tran-Davies’ The Doll focuses on a refugee family who hopes to make a new life in Canada while Thao Lam’s Thao portrays a young Vietnamese girl who becomes comfortable with her own cultural identity. Family dynamics and intergenerational relationships are also explored in other stories. Chieri Uegaki’s Ojiichan's Gift focuses on the relationship between a young Japanese girl and her grandfather. Sennah Yee’s My Day with Gong Gong depicts a Chinese girl who goes with her grandfather to Chinatown where she develops a connection with him that bridges their linguistic barrier. Other picture books focus on specific cultural traditions, events, and cuisine. For example, Loretta Seto’s Mooncakes revolves around a young girl who celebrates the Chinese Moon Festival with her parents.

My Love for You is Always is a picture book that offers a gentle and poetic story about a mother’s love for her son that readers of all ages, including adults, can relate to and enjoy. Although it is situated within a specific cultural context, the story explores sentiments that are universal to the human experience. As personified through the mother’s son in the book, children have a natural curiosity about the world around them and seek to imbue their experience with significance and meaning. In doing so, they may ask questions that parents or other adults may struggle to answer because they are not straightforward or simple.

Sze skillfully crafts a story that is appropriate for her book’s primary audience of readers between four to eight years of age. The difficulty level of the book’s language is suitable for that audience, but its narrative is one that adults can also enjoy. The narrative opens with the familiar domestic setting of the family kitchen in which a mother has just returned from buying groceries and is starting to prepare for their next meal. At this point, her son asks, “Mama, do you love me?” When she responds that she does, her son follows up by asking, “But what is love, Mama?”

This question launches the story’s narrative trajectory, and it progresses from there with his mother’s efforts to express the meaning of love to her son who then asks additional questions about love that pertain to the five senses: sight, sound, taste, smell, and touch. To convey the sentiments and complexity of emotions that encompass love, his mother evokes similes and metaphors that derive from the qualities of various Chinese foods, thereby enabling her son to relate to these from his own experience. Through these comparisons, his mother conveys her boundless and unquantifiable capacity of love for her son. As she expresses it, her love is “sweeter than the red dates I put in your soup” and “more than all the grains of rice in all the fields in the world.” She also refers to other items such as cardamom, wolfberries, winter radishes, and carp in her descriptions of love. Finally, she concludes by saying that she will always love her son, no matter what.

The style, colour scheme, and placement of Lee’s illustrations effectively complement the text by highlighting key narrative moments and drawing attention to items that will be significant to the story. For example, a double-page spread early in the book shows an image on the left-hand side and the text on the right-hand side, thereby drawing attention to both. The centred image depicts the mother’s son who stands and holds some tomatoes while asking the question, “But what is love, Mama?” This short line of text appears on the right, giving it significant emphasis and conveying the importance of that question for the son. The image is set against a white background. When readers turn the page, they will see a two-page illustration that invites them into the warm confines of the kitchen. The counter is filled with a variety of Asian foods that are vividly coloured to give them emphasis whereas the background setting is lightly outlined in faint, reddish-brown lines. Within this scene, the mother prepares a meal, and her son helps to put vegetables on the counter. These illustrations signal that Chinese cuisine will be a defining motif of the ensuing discussion between the mother and her son.

A number of the book’s two-page illustrations immerse readers in the narrative and convey the immensity of the mother’s love for her son. In doing so, they provide a visual rendition of love by conveying the emotional warmth of their home as well as evoking the five senses that the mother uses to explain what love means. When her mother mentions what love smells like, the text is accompanied by a two-page full-colour spread that shows the mother dropping some spices into the wok while her son watches. Above them, a wafting smell of spices emits from the wok and stretches over the top portion of the book’s page, thereby conveying the impression that the smell is enveloping the entire kitchen. The surrounding kitchen appears in the illustration’s background and is represented with lightly drawn lines and a gentle meld of various colours that convey comfort and warmth. This visually creates a unifying effect between their discussion of love and the domestic setting within which it occurs.

Similarly, when her son asks how much she loves him, the accompanying two-page illustration includes a greenish-blue backdrop that is meant to suggest the ocean against which two scenes are depicted. One shows the mother and son bringing the food to their dining table while the other shows three giant orange carp that are swimming in the ocean. Lines suggesting movement create a sense of dynamism to the carps. Besides being positioned above the mother and son on the page, the carp are also drawn to appear much larger, thereby creating the impression that they are dominating the scene. At the same time, the illustration conveys the domestic scene’s coziness due to Lee’s choice of soft lines and gentle colours. Her choice of a bluish colour scheme for both the ocean and dining room also creates a sense of unity as both settings appear to meld into one another on the page.

Besides these larger illustrations, the book has smaller illustrations that convey intimate moments between mother and son. For example, one illustration shows the mother and son standing behind a table while she pours some hot tea for her son. In another illustration, the mother crouches beside her son and dog while offering a slice of persimmon. One of the book’s final scenes shows the mother hugging her son against an encircling backdrop that depicts a flying dragon, swimming carp, as well as the seas and sky. This provides a satisfying resolution to the story as it revisits images that have appeared earlier in the book. The dragon and carp also have cultural significance for Chinese communities as they represent things such as family harmony, good fortune, and wealth.

Readers familiar with Robert Munsch’s Love You Forever (1995) may be reminded of that book in Gillian Sze’s My Love for You is Always since both stories express an uplifting affirmation of a parent’s enduring love for their child. However, what distinguishes Sze’s book from Munsch’s is the cultural context that permeates the entire narrative arc. The narrative is infused with a distinctly Asian perspective that, at the same time, evokes a sense of universality that will make the story resonate with all young readers, regardless of their cultural background. As a result, Sze’s book is a good example of how authors can write “universal” stories without compromising their intent to situate those stories within specific contexts of underrepresented perspectives and experiences. In addition, it shows the value of having more authors from diverse backgrounds who can convey the breadth of human experience.

My Love for You is Always lends itself well to being a read-aloud book because of its accessible language and straightforward plot. Even for readers who are too young to fully grasp the book’s discussion of love and the comparisons made, its vivid and colourful illustrations will keep readers’ interest. Readers who are less familiar with Chinese cuisine will appreciate the labelled images of the different fruits, vegetables, and other items from Chinese cuisine that appear inside the book’s front and back covers. They include foods such as winter radish, lotus root and bok choy.

My Love for You is Always will be a good addition to any library that wants to increase the diversity and inclusiveness of their picture book collections or, more specifically, its range of books that depict Asian peoples’ experiences. In the classroom, teachers can use this book as an opportunity to educate students about Chinese cuisine and traditions. It could provide a starting point for a broader discussion about the types and significance of cuisine in different cultures, their origins, and what they might reveal about the histories of those communities. This book could be readily included in a unit about picture books, Asian literature, or children’s literature.

Gillian Sze is an award-winning author who has published poetry collections, creative nonfiction, and, more recently, books for children. Currently, she resides in Montreal, where she teaches creative writing and literature. Michelle Lee is an illustrator and author based currently in Los Angeles. Besides illustrating picture books, she works as a freelance illustrator and designer. More information about them is available at Gillian Sze’s website https://gilliansze.com and Michelle Lee’s website https://mklillustration.com.

Huai-Yang Lim has a degree in Library and Information Studies. He enjoys reading, reviewing, and writing children’s literature in his spare time in Edmonton, Alberta.