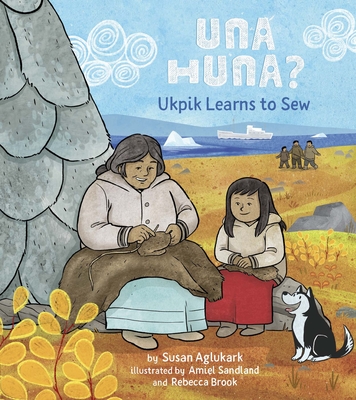 “Anaana, how much more do I need to do?” Ukpik asked, setting her work in her lap.

“Well, how warm do you want your hands to be this winter? Anaana replied. “Ukpik everything we do is in preparation for the next thing. You must learn to sew in order to be prepared for the next season and the season after that. Everything you sew must fit you as well as possible, otherwise it will not serve you well for its season. You have grown this year, and so we need to replace your mittens. These should be good for the next couple of winters, but then you will need to make another pair, and possibly you will have to learn to make your own kamiik, your sealskin boots, as well.”

“You must begin your lessons now so you know how to do the right stitches for each pattern. The size and shape of the stitches matter, Ukpik, and to get these right, you must practice. You and Qopak will practice every morning from today until your mittens are done.”

Ukpik is a young girl living in the Arctic. Her mother, Anaana, aspires to teach her how to sew so she will be prepared for the winter ahead. After returning from a hunting trip, Ukpik’s father, uncle, and cousin give Ukpik’s mother caribou skins that she plans to use for a special project. Earlier that day, she had traded with a Captain for some beautiful beads that she will use in her project. Ukpik is very excited about the beads, but she doesn’t know what her mother is planning. Anaana will teach Ukpik to sew while she works on her project.

Anaana and Ukpkik start by cleaning the caribou skins with an ulu, a knife. This helps to make the skins smooth. The skins are then stretched out and left to dry in the sun for a few days. By this point, Ukpik is getting a little impatient, and so her mother allows her to work with the beads by telling her to string the beads following a specific pattern. That the string of beads will be added to the finished project excites Ukpik, and she works hard to make sure she gets the pattern exactly right.

When the skins are finally dry, Anaana and Ukpik have some fun by stomping on the skins to help soften them. When they are soft enough, Anaana cuts out a pattern and lets Ukpik use the scraps to practice her sewing skills by making a pair of mittens. Ukpik’s friend joins her, but, after a while, the two girls begin to get restless and want to go and play. Anaana eventually lets them do so, but she explains the importance of learning to sew to make clothes that will prepare them for the various seasons in the Arctic. Ukpik understands the importance of her mother’s lessons and can appreciate the hard work. Ultimately, she enjoys learning and the time spent with her mother.

As a follow up to Una Huna? What Is This?, Susan Aglukark further explores the importance of tradition and family while living in the Arctic. Una Huna? Ukpik Learns to Sew is about growth and the preservation of tradition in the face of change. To survive the harsh winter season, Ukpik and her family’s livelihood is dependent on the traditions and skills taught by past generations. The yearly arrival of the Captain and his ship not only brings new goods for trade but also proof that the outside world is changing. With these inevitable changes, Ukpik’s mother worries that all the skills taught to her by her mother and grandmother will eventually disappear. However, change does not mean family traditions need to be given up. They live on through the members of the next generation who can incorporate the cultural traditions into their daily lives.

Una Huna? Ukpik Learns to Sew is a beautiful story that is lively and thought-provoking. Many readers will find the process of creating clothes from animal skins interesting and will be able to relate to Ukpik who sometimes just wants to play with her friends. The illustrations are simple yet convey a lot of emotion ranging from Ukpik’s frustration with learning how to sew, to her joy when she plays with her dog. What further enhances this story is the incorporation of the Inuktitut language. To help readers with the interpretation and pronunciation, there is a very useful guide at the end. I highly recommend this book for all readers inside the classroom and out as it is a wonderful peek into an important aspect of Inuit culture.

Julia Pitre is a Children’s Librarian with London Public Library in London, Ontario.