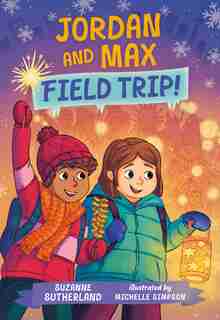 It wasn’t that Jordan wanted to slip away from the group. It just sort of happened, like he had been hypnotized. One moment he was following along behind his pack of classmates, listening or at least trying to, and the next he was standing in front of a glass case with the most astonishing garment in the world. Maybe in the whole universe.

There were more crystals sewn into the rich-blue bodice of the dress than Jordan guessed were stars in the sky. And the skirt blossomed from underneath, seeming to expand forever. All Jordan wanted to do was touch the fabric for a moment, to feel something this perfect just once……….

“Well, when you ditched the group to go your own way, I figured I would too. Like I was seriously going to miss my favourite part of the museum!”……..

“It’s just you and me!” Max spread his arms wide and swooped around his friends once more. “Now we get to have our own adventure!”

Readers first met this pair of best friends in Jordan and Max, Showtime, and now Max and Jordan are excited to be on a class field trip to the museum. The class had to take the subway to get there, and Mr. Waters was the parent helper assigned to watching Max and Jordan.

Jordan’s avid interest in costumes and dressing up was inspired by his grandmother and her large collection of fabulous outfits that she acquired while living in New York City as a young woman. At the museum, when Jordan saw the sign, “Special Exhibit, History of Fashion”, he could not resist. Max, too, was lured away, but, for him, it was the Bat Cave that he couldn’t resist. Mr. Waters proved to be a negligent supervisor, and, before long, he had lost sight of the two boys, and they were on their own in the city.

Their adventure took Max and Jordan to many interesting destinations, with their first stop being the food trucks parked downtown. After buying lunch, they ended up at the university where they settled down to eat. The next stop was a park where they met Rainbow Woman, a homeless person wearing multiple layers of brightly coloured clothing, and she wished them “Happy Solstice”. On the way to the CN Tower, the boys listened to a band called the “Longest Night Players” and went with the crowd that was following the band. The boys found themselves in an interesting neighbourhood with tiny shops that sold beautiful dresses. By this time, it was getting dark, and Jordan was feeling anxious about being lost. Suddenly, the Rainbow Woman appeared and more people joined them. It was a parade celebrating the Solstice. Jordan had never seen such wonderful and outlandish costumes. Finally, Mr. Waters, the laggard parent helper, found them, and he phoned Jordan’s grandmother who arrived to get them. Max’s sisters had also been on the lookout for the pair. The girls had put a tracker on Max’s phone. When they showed up, the five of them went out for supper. The museum trip was not as planned, but it still turned out to be an adventure. Jordan had never felt this free.

Jordan and Max, Field Trip! takes a gentle approach to the topics of gender identity, friendship, and acceptance of those who live alternate lifestyles: Mr. Waters, the parent supervisor, speaks of his husband; Rainbow Woman is homeless: and the participants of the Solstice Parade make Jordan feel comfortable in his own skin.