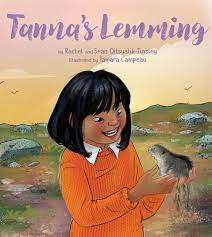 With Inuit-owned publisher Inhabit Media, the author has produced a new book to follow her well-received Tanna’s Owl. At the opening, there is an introduction to Qitsualik-Tinsley’s memories of a childhood in the Canadian North and what she learned about being connected to the land.

The story begins this way.

On the day Tanna met her lemming, the sun never set.

It was the Arctic in summer, so the sun went round and round the Sky.

Everything was golden and bright, whether day or night.

Tanna and some other children are hunting for lemmings on the tundra. A scientist is looking for animals to study and has offered them money for each one that they find. But when Tanna comes across “an especially small lemming”, she decides to save it from becoming a research specimen.

Tanna pauses after she has picked up the lemming. She remembers her father’s words.

“There is a force,” Father has told her in his work shed
one afternoon, “that is part of the Sky. It cares about the
little things of the world. You must never offend it.”

“…It’s like Thunder, he finally said. “Thunder is hard to
imagine. But when you hear it, you know what it is.

Every life is important,” …. “Even
mosquitoes. Always respect the little ones. If they’re
mistreated, bad things happen.”

The girl names the little lemming Fluffi and brings it with her to live in the family’s small frame house where it nests under the coal stove. Tanna feeds it oats but sometimes, when she lets it wander outside, it eagerly eats the native food.

The animal grows, and the seasons change.

The sun finally set on the day Tanna made a leash.

Winter was here. Tanna wanted to make sure she would
never lose Fluffi in the snow, so she wove the smallest
leash in the world – out of bits of yarn.

At school, Tanna looks at a map of the Arctic showing the range of lemmings over the land. She worries that Fluffi could wander and be lost in the great space out there. But being a house pet does not really suit the growing animal. It earns Mother’s wrath when it chews through some fine silk cloth she has been saving, and Tanna realizes that she will have to release Fluffi.

Tanna gave Fluffi a kiss. She stared at her lemming,
now brown and round. How could Fluffi survive out there?

“May Thunder take care of you,” Tanna whispered.

Again, she tried to picture Thunder in her mind.

She just could not do it. She released Fluffi into the whiteness.

Come spring, Tanna is again out on the land, looking for lemmings, and particularly for the one small animal that she had nurtured. Had Fluffi lasted through winter all alone?

Then like a flash in her mind, it occurred to Tanna: many of these lemmings
had survived the winter. The worst of winters: Arctic winter.

But not one of these lemmings had lived behind a stove.

Or eaten oats. Or been carried in a box.

She realizes that the lemmings were adapted to live on their own, even through the harsh cold of an Arctic winter. Tanna sees that, in wanting to keep the lemming as a pet, she was ignoring its true nature.

The sequence of events is clearly and vividly described. Tanna’s emotions, from the delight upon first finding Fluffi to her worry about her lemming being out in the cold on its own, are clearly heartfelt. Capitalization of words like Sky and Thunder is done with intention. The slightly longer text makes Tanna’s Lemming more a ‘storybook’, rather than a picture book, and suitable for newly-independent readers or one-on-one sharing.

The illustrations in this comfortably-sized book are bright and expressive, with colours that reflect the seasons that Tanna and her little friend are living through. The small community of steeply-roofed houses and an Arctic landscape of rock and low-growing plant life are shown with accuracy. The typeface used mimics someone’s very neat hand printing.

Tanna’s Lemming is another worthwhile book about indigenous life in Canada for school and public library shelves.