From the Tops of the Trees 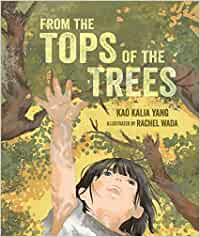 From the Tops of the Trees

“What is the world outside this camp like?” I ask.

From the Tops of the Trees, with its visually striking illustrations, is a truly exceptional picture book that acts as a memoir. The book’s action takes place in 1985 in the Ban Vinai Refugee Camp in Thailand, and its pages include a useful resource map in the “Author’s Note”. Kalia’s Hmong family had fled war and settled in this refugee camp. Kalia is only four-years-old at the time this story takes place, and, because she was born in this Thai refugee camp, she does not completely understand her environment.

Despite the presence of hardships within the refugee camp, the tone of the writing is joyful. Kalia acknowledges realistic hardships, like their living behind a gate or her aunties being scared and talking about war. The dialogue adds to the joyful tone since it’s simple enough for a four-year-old to understand while also being extremely heartfelt, such as when her father tells her, “One day my little girl will journey far into the world, to the places her father has never been.”

Young readers and children listening to this story will be able to connect with the childlike aspects of daily life, activities such as playing with cousins around a favourite tree or describing a puffy dog as a “Lion Dog” or the children’s pretending that the fallen fruit on the ground is hard candy.

The book centers on an important memory of Kalia’s father climbing a tree with her on his back. On this day, her mother dresses her in her nice dress and hat and her father puts her on his back and climbs up the tallest tree in the camp, saying, “Look the world is bigger than this place.” Her mother takes a picture of the two high among the leaves, and, amazingly, that actual photograph is included at the end of the book! For me, the truly inspiring part of this story is that photograph.

Wada’s illustrations feature soft muted watercolours. I particularly liked how the foreground characters are in focus and how the figures and landscape in the background are simplified to better focus readers’ attention on what the text is describing. The expressions on the characters’ faces are also very genuine and really serve the emotional tone of the story, with an example being the wonder on Kalia’s face when her father takes her up to the top of the tree. From the Tops of the Trees would work great in a classroom setting since it makes this nonfiction subject matter of refugee camps really come to life.

Reagan Kapasi is a toddler mom and recently pivoted from being a Children’s Librarian to a Reference Librarian at the Toronto Reference Library in the Languages and Literature Department. She also serves on the Ontario Library Association’s Child and Youth Services Committee and Reader’s Advisory Committee. Reagan has worked as the Director of Inventory and Outreach for The Children’s Book Bank, a children’s literacy charity that gives away free books to children and families in high needs, Toronto neighbourhoods.